Continuing southbound on the US-101 in Oregon. Today a 180-mile /280-kilometer drive from Newport to Gold Beach.

We passed on the nearby Thor’s Well and the Sea Lion Caves, as we wanted to visit the Heceta Head Lighthouse. That state park was already pretty busy late in the morning, but the path itself to the lighthouse, surrounded by huge Sitka spruces, was not crowded. Even though the lighthouse itself is pretty small, it is one of the most powerful along the Oregon Coast: its Fresnel lens has visibility of close to 25 miles / 40 kilometers! The views from halfway up the Heceta Head were beautiful as the morning mist was still lingering in the bay. Due to visiting the Oregon Coast Aquarium the day before, we were actually able to identify some of the seabirds on the rock! 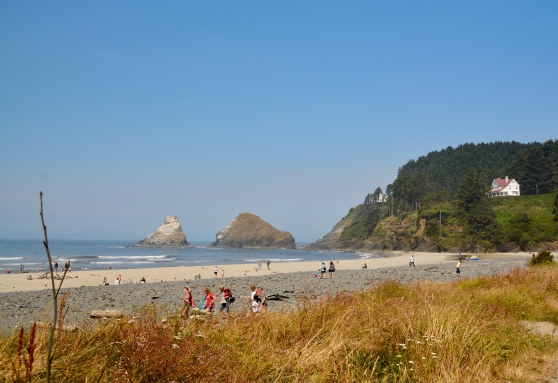 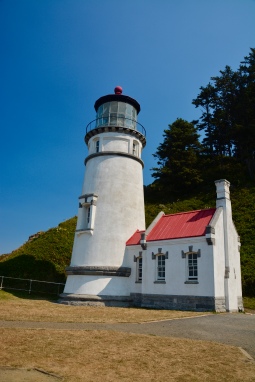 The Heceta headland also marks the end of the more elevated and rougher coastline of Northern Oregon and gives way to a long stretch of lower-lying coastline from Florence to Coos Bay that is dominated by sand dunes. Our first view of this landscape was at Baker Beach.

As the temperature hit 38℃/100℉ at noon, we did not follow-up on the ‘must-do’ tip from the Lonely Planet Guide to climbing Banshee Hill, at 150m / 500ft the biggest sand dune in the US.

Our lunch spot was a very last-minute decision due to some blank spots in the T-Mobile network in Oregon. We had a data connection again only when we reached the outskirts of Coos Bay. On a parking lot of a nursery, we decided on Little Italy Restaurant (160 South 2nd Street), the best rated Italian restaurant in Coos Bay on Tripadvisor. 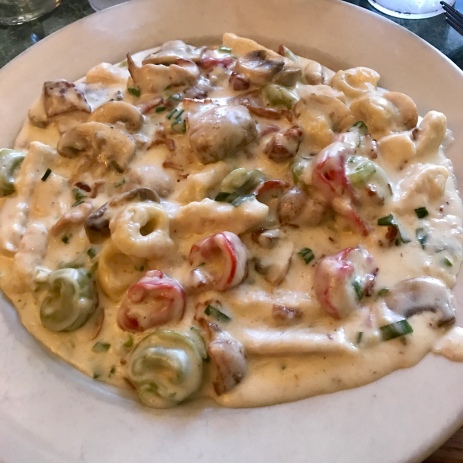 Their classic Italian-American fare was excellent: from the Fettuccine alfredo (pasta with heavy cream and Parmesan cheese sauce with chicken breast), Tortellini di Angelo (Three color cheese tortellini, chicken breast, bacon, mushrooms, and creamy garlic sauce), Spaghetti and Meatballs and the Eggplant Parmigiani (pan-fried eggplant topped with mozzarella and baked in tomato sauce), we were not disappointed and well-fed as the portions were huge. It was our first doggie bag experience as our oldest was very reluctant to leave his fettuccine behind.

Back on the road, the sign with “Humbug Mountain State Park” immediately prompted me to recite some classic British comedy banter from Blackadder’s Christmas Carol. Chantal and the kids hadn’t seen it, so I was snickering all by myself 😃.

In Gold Beach, we stayed at the SureStay Plus Hotel by Best Western (29232 S Ellensburg Ave), which was still known as Gold Beach Resort at the time I booked. A good thing that they changed their name as one could easily confuse it with the Gold Beach Inn just a couple of hundred yards down the road. Okay, it was me who confused the two hotels… When pulling over at the Inn, I already thought that the hotel looked distinctly different from what I remembered from the website.

The kids half-jokingly complained that they had such a hard time: every day in different hotels, in the same room as their parents, tired from going to bed late and not being able to sleep in, having to walk around, visiting stuff and not being allowed to game the entire time when in the car… Fortunately for them, the hotel had a swimming pool, so they enjoyed the remainder of the afternoon floating around on an inflatable stroopwafel.

Our lunch did lay heavy on the stomachs, so we decided to have a late dinner at Spinner’s Seafood Steak & Chop House (29430 Ellensburg Ave), just down the road from the hotel. For me, no accompanying soup and potatoes, just salad, veggies, a 14oz whiskey marinated New York Strip Steak, and a good glass of Fort Walla Walla Cellars Syrah. Bliss! 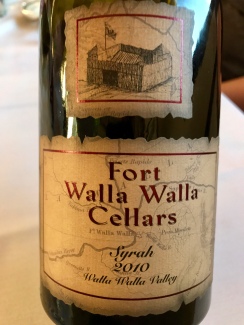 The sunset was very apparently something special given the sea fog as the waiting staff even stopped service to have a proper look!