As my blueberry cobbler turned out amazing, Stella Parks’ recipe for a huge upside down blueberry muffin I saw over at seriouseats.com was a no brainer!

And, it worked like a charm! Nothing to add or do differently. Admittedly, the ‘no brainer’ reference was chosen intentionally as apparently some synapses misfired and I mistakenly read cloves instead of nutmeg. 😳 Even though the quantity was very small (1/8th of a teaspoon / 3 whole cloves ground in my pestle and mortar), its flavour was still overpowering. Oh well, better luck next time!

The (normally) slightly spicy batter is spread over a lemony fresh layer of sugar-coated blueberries and baked in the oven using a cast iron pan as mould.

Therefore, turning it upside down “tarte tatin-style” will get you a jammy layer of berries on top of a light and fluffy muffin base.

I had more blueberries than required for the recipe, so ended up using one 28cm/11″ and one 20cm/8″ cast iron pan that both had a single layer of blueberries. 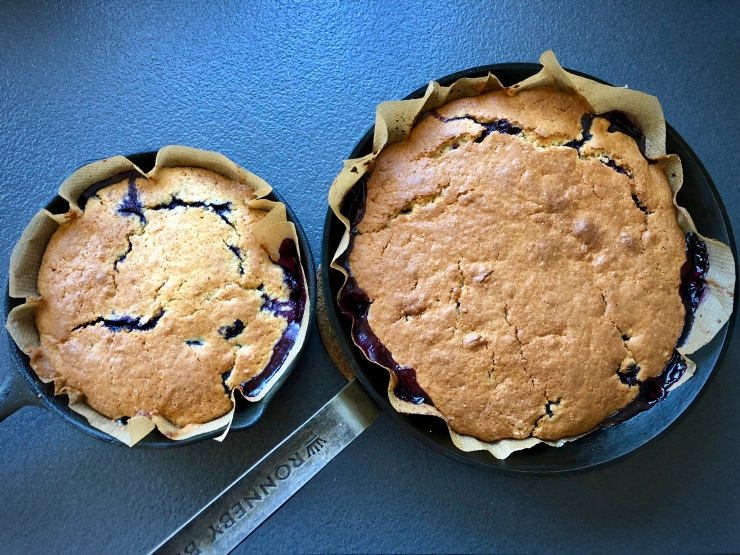 As the recipe mentioned, the cooking time is about 45 minutes, but will very much depend on the heat transfer of the cast iron pan you are using. This is definitely something to keep a close eye on as mine were already done in 40 minutes!

It does get a bit stale overnight, but I don’t think it wouldn’t even get the chance to do so…