Burger Week at Arcisfoodblog goes international: Today, two memorable burgers we had during our summer holidays in Denmark and Portugal.

Let’s start with the one from Denmark:

After a stroll through the quaint city center and harbor of Assens, we sat down at the terrace of Café Banken (Østergade 14-16). I choose their Bankens Burger (DKK 119 / EUR 16), a 200g beef patty covered with cheddar and bacon rashers, served on a fabulous freshly baked bun that was topped with mayonnaise, tangy salad leaves, sun-dried tomato, red onion, and olives. The slightly smoky burger was terrific, and I loved the Mediterranean flavors and the addition of remoulade sauce as a dip as it went very well with both the burger as well as the fries. The burger was washed down with a pint of Vestfyens Classic from the tap (produced by the local Bryggeriet Vestfyens). Delicious!!

Moving along to Portugal:

On our way from “The End of the World”, we stopped at B.B.E. (Best Burger Ever), a roadside burger joint on Rua Infante D.Henrique in Sagres. This is a family restaurant originally from Tel Aviv, Israel but they moved to Portugal around 8 years ago. 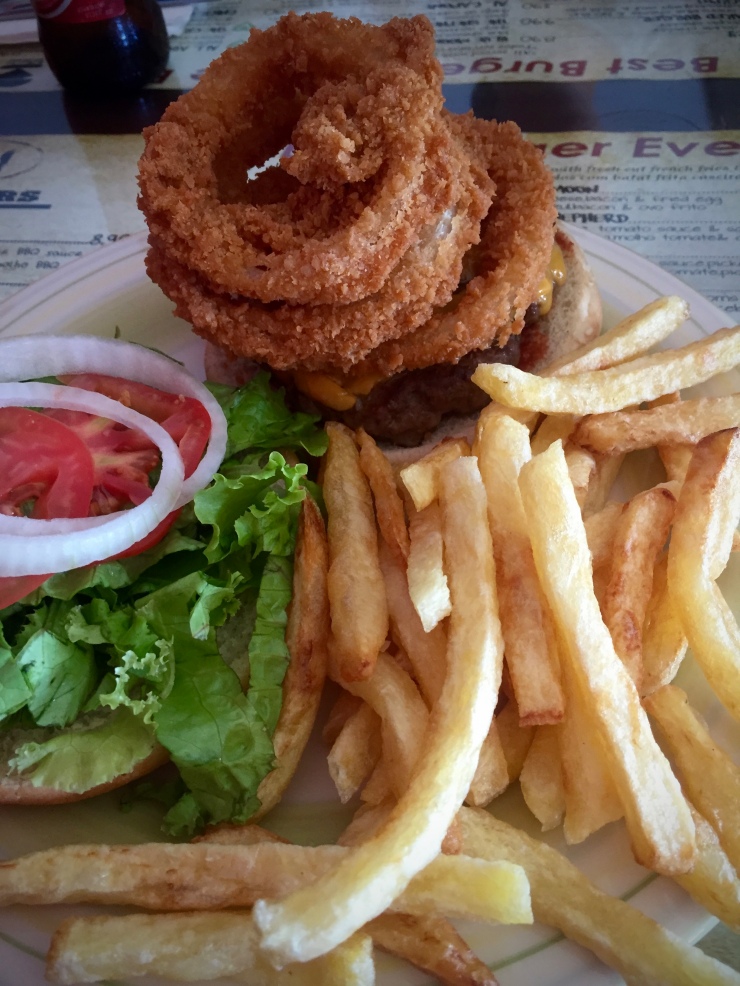 This one was most memorable for its anecdotal context as the Summer Olympics in Rio were on at the time. This BBE’s signature burger was called “Lord of The Rings”, which is also the nickname of Yuri van Gelder, a gymnast who was controversially ejected from the Dutch Olympic team a couple of days earlier due to “disorderly conduct”. Apparently a bit too much celebration after qualifying for the finals a week later…

So when I saw the Lord of the Rings burger (EUR 10,50) on the menu, I couldn’t help myself and had to order it. No regrets there, the burger was clearly home-made and was nice and juicy. It was complemented with a tasty BBQ sauce, cheddar, and 3 large onion rings. They were crispy on the outside and soft on the inside, and their sweetness contrasted nicely with the slices of fresh onion. The fries could definitely have been crispier though. Not the Best Burger Ever, but very lovely nonetheless.