Starting off with some great shots that Chantal took during her morning run on the Astoria Walkway: 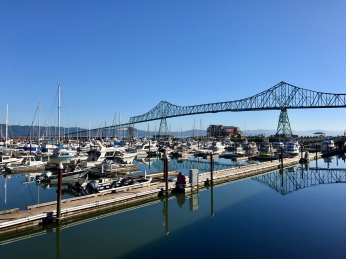 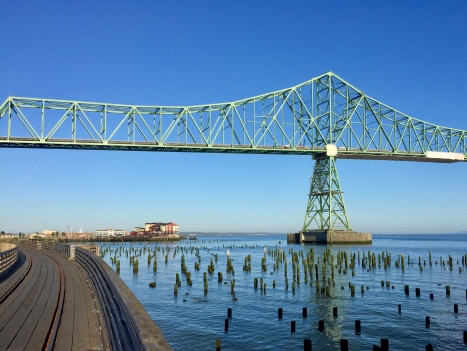 On the 6th day of our holidays, we had a relatively short drive of 140 miles / 220km today, continuing southbound on the US-101, which is aptly called the Oregon Coast Highway.

Cannon Beach
After a quick inventory of the breakfast buffet (we are not big fans) at the hotel, we decided to skip it and stop at an already identified crèperie in Cannon Beach, a relaxed coastal town in its seasonal prime, our first stop along the way. 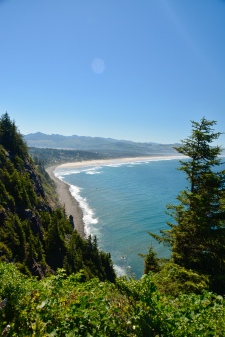 After our breakfast, we headed down the beach to look at the Haystack Rock, a 235-foot (72m) monolith. At low tide, you can walk all the way to the rock and be amazed by the small creatures in the tide pools. For the movie buffs, also the Haystack Rock features in The Goonies. Today’s stretch of coastal road was clearly one of the most impressive ones we have ever driven and just littered with vista points that have absolutely amazing views. Just posting a few here: The right ones are from Otter Crest and the bottom left is from Neahkahnie Mountain.

Tillamook
Due to our late breakfast, we just had a quick stop in Tillamook, the cheese capital of the Pacific North West. We decided to head over to Blue Heron French Cheese Company (2001 Blue Heron Rd), which turned out to offer much more than just their Brie specialties. It also had wine tastings, a deli section (with a great selection of soups, sandwiches and salads; as you can see, they weren’t skimpy with the quantity of cheeses on our sandwiches!) and a souvenir/gourmet food/cooking shop, with a very nice assortment of truffles and artisanal chocolate (the potato chip one was our favorite). 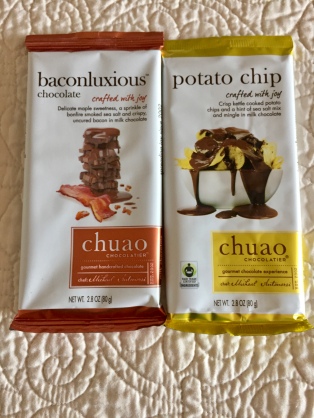 Newport
After our beautiful drive, we checked into our hotel, the La Quinta Inn & Suites Newport, and headed to the Oregon Coast Aquarium (2820 SE Ferry Slip Road), which was only a couple minutes away. It is not a huge aquarium but has very educational exhibits focusing on the local wildlife with a sea-bird aviary with various penguins, auks, guillemots, and puffins as well as lookouts onto one of Oregon’s largest estuaries. 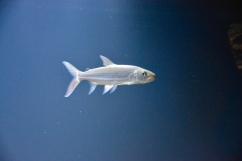 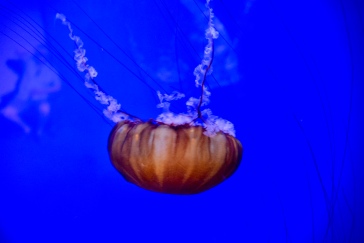 Drinks and dinner were down the road from the Aquarium at the HQ of Rogue Nation  (2320 OSU Drive) with their brewery and brewpub located just under the Yaquina Bay Bridge. There are 3 other tasting rooms in downtown Newport and a few in Astoria and Portland as well. 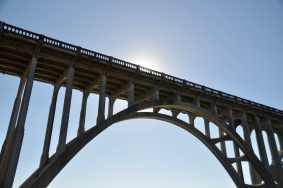 Rogue Nation Ales and Spirits is their full name and is the most inventive all-in concept we encountered on our travels. They operate their own farms growing rye, hops, barley, vegetables, fruits, honey and nuts that either end up in their beer, sodas, ciders, spirits or in the pub grub. The bulk of the cheeses are from Rogue Creamery, which actually is an independent company that has been working with them for a long time.

Also in their brewing and distilling, they don’t shy away from experiments: besides the roster of 40 different beers, they also use some pretty unexpected ingredients like soba wheat, chocolate, pumpkins and chipotle. Not without success either as their beers and spirits are raking in awards all over the world. Besides the tasting board, we also tried the and Pendleton Pale Ale, The Hot Tub Scholarship Lager and the  Good Chit Pilsner. The hoppiness of their IPAs can be pretty extreme, but their pilsners, hefeweizen, and regular ales were delicious.

Already for the design of the bottle alone, we took home a bottle of the Sriracha Hot Stout, but it must be pretty good too as it got a Gold Award in the 2015 World Beer Championships. One to keep for fall/winter! 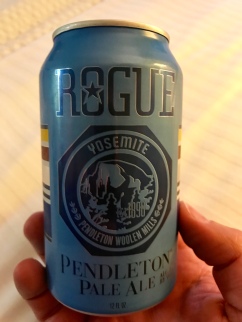 I couldn’t decide for mains and therefore went for 2 starters: Rogue Poutine and Kobe Blue Balls. It was a first for me to have poutine due to the unavailability of the cheese curd concept in the Netherlands. Short ribs stew – slowly simmered in Shakespeare Stout – with cheese curds, served over a generous helping of Rogue Farms’ Hopsalt Idaho fries. The picture may not be all that, but I assure you that this dish was pretty darn good!

The Kobe Blue Balls consisted of 3 Snake River Farms Kobe beef meatballs stuffed with – and topped with – Rogue Creamery Blue Cheese, which was very pungent, but tasty and paired nicely with the darker ales. Too bad that the balls themselves were a bit dry.

When offering the kids the choice of the 4-cheese Mac ‘n Cheese (Rogue Creamery White Cheddar and Blue Cheeses, Gruyère, and smoked mozzarella) from the menu or the plain one from the kids’ menu, they choose the latter due to the lack of blue cheese. Alas, to their disappointment and our amusement, this was the only time that the kid’s size portion was just that.