Around the World – Oslo, Norway

For a skiing holiday, we went to Norway this year. As we were located just north of Oslo, we combined skiing with a mini city trip!

Trying to avoid the regular traffic jams in France, Germany, or Austria when going skiing in the Dutch school holidays, we ventured north. It was the most relaxed drive ever, especially with the layover in Copenhagen, to cut the 1400km trip in two.

We had booked the charming Lysebu Hotel in Voksenkollen, on the northern outskirts of Oslo. Comfortable design rooms with amazing views and measuring the additions to the icicles on one of our balconies every day. Friendly staff, a great breakfast buffet and indoor pool made it a pleasure staying there. 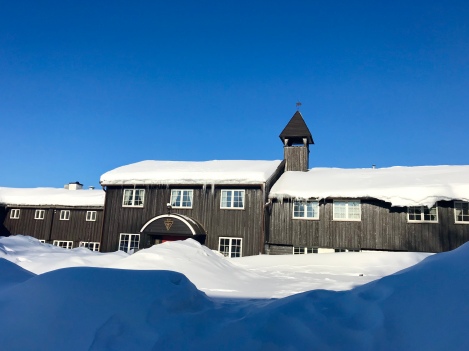 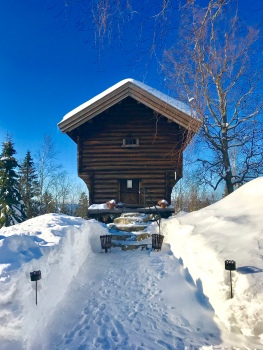 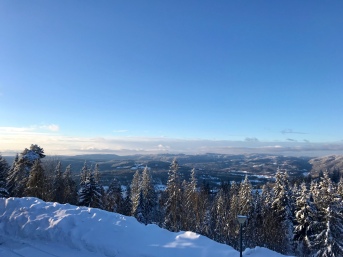 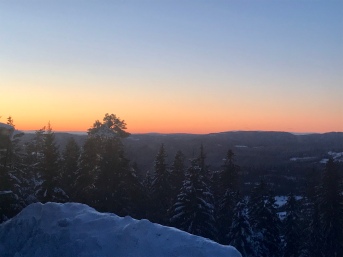 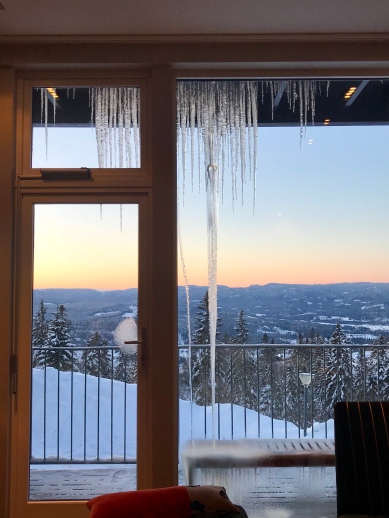 Our hotel was about 1 kilometer away from the Tryvann ski area (a.k.a. Oslo Vinterpark). Although its elevation is only about 500m / 1.600ft, there was plenty of snow, and as the Norwegian school holidays had just ended, it wasn’t crowded at all. 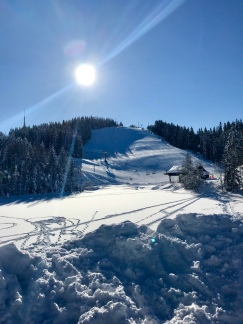 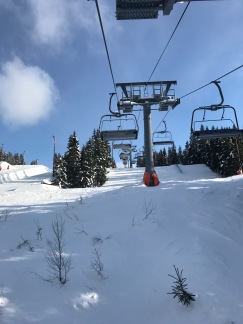 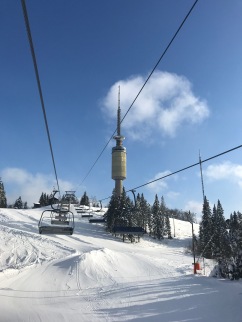 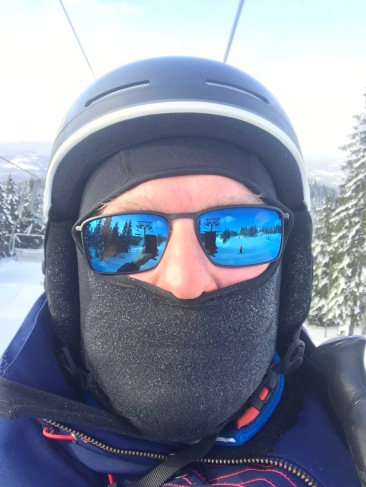 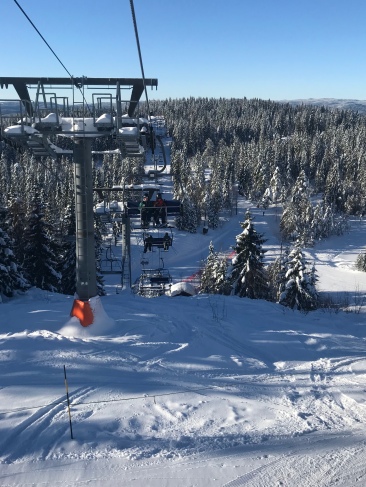 Great skiing, but due to the cold (we started at 10am with -16℃/3℉ and it didn’t get any warmer during the day than -8℃/17℉) combined with the wind-chill, we alternated skiing with exploring Oslo and visiting various museums.

As said, we were located on the more elevated outskirts of Oslo, so we could conveniently take the tram down to the city center. After a walk through town, we had coffee, hot chocolate, cookies, and a kanelbolle at Kaffebrenneriet next to the Oslo City hall to warm up again. Afterwards, we took a bus to the Bygdøy peninsula (host of many museums and providing a great view of the city!) to visit the Kon-tiki Museum. When we came back to the city center, we had a great lunch and IPAs at Amundsen Bryggeri & Spiseri. Finally, we visited Oslo Reptilpark. Alas, due to the difference between the freezing cold outside and the tropical conditions inside, my glasses and camera kept fogging, so no pics from there.

The Kon-Tiki Museum
As said, the first museum we visited was the Kon-Tiki museum, chronicling the adventures of the Norwegian ethnographer Thor Heyerdahl who became famous with his Kon-Tiki expedition in 1947. Heyerdahl, who had a background in zoology, botany, and geography, wanted to prove his – controversial – hypothesis that ancient people could have made long sea voyages, and consequently, that the Polynesian inhabitants could have come from South America rather than the predominant notion that they originated from Asia and contact between the two was only established after European conquistadors explored South America and the Pacific.

To that end, he sailed across the Pacific Ocean in a hand-built raft made from balsa wood and bamboo. The journey from the coast of Peru came to an end after 101 days when the Kon-Tiki stranded in a reef off the Tuamotu Islands after 8,000km (5,000 miles). He did prove that it was possible to sail the Pacific on a raft made with materials and techniques that were available to the Incas, but anthropologists still dismissed his theories. It was proven recently that (parts of) Heyerdahl’s hypotheses were indeed correct as, via DNA testing, it was established that there have been contacts between Polynesia and South America that predate their European discovery.

The museum houses the original Kon-Tiki raft and has plenty of interesting displays, footage, and the Oscar Award that the documentary on the expedition won in 1951. Furthermore, a lot of information is available for his subsequent archeological work on Rapa Nui (Easter Islands) and on the Ra and Ra II expeditions of 1969 and 1970. In these ones, Heyerdahl tried to cross the Atlantic on boats made from papyrus reed. Started in Morocco, the Ra actually sank 800km before it should have arrived in Barbados due to a construction error. The Ra II fared better; it finished the journey and is also on display at the museum.

The Viking Ship Museum
On our second day in town, we went to the Bygdøy peninsula again to visit the “Vikingskipshuset”, The Viking Ship Museum, that displays 3 well-preserved ships discovered in burial mounds in Oseberg, Gokstad, and Tune, together with many artifacts displaying the fantastic craftsmanship of the Vikings. 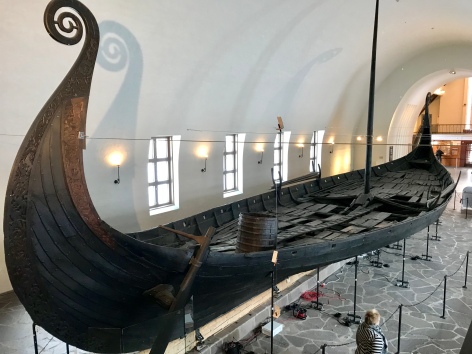 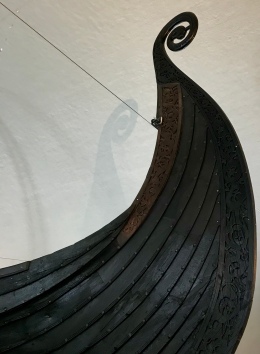 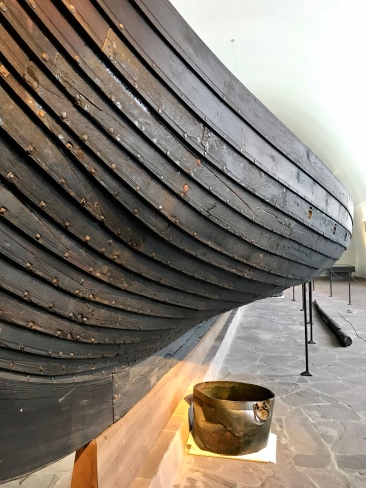 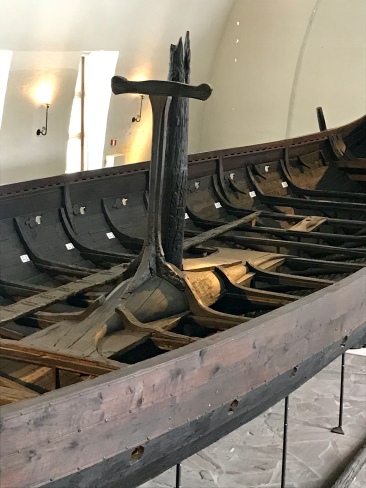 I was aware of the western expeditions to Greenland and North-America, but the remarkable fact that the Vikings had also ventured south and – via the Mediterranean Sea – traded with territories around the Black sea was definitely new for me.

The FRAM museum
Opposite the Kon-Tiki museum lies the FRAM museum, which is dedicated to the Norwegian polar explorations and those of Roald Amundsen in particular. After being the first to reach the South Pole in 1911, Amundsen was the leader for the first air expedition to the North Pole in 1926. Thus making him the first person to reach both poles.

By the end of the 19th century, the Arctic and Antarctic regions became the focus of international efforts to explore uncharted territory that resulted in intensive scientific and geographical explorations; 17 significant expeditions were launched from 10 countries until the start of WWI. As with Heyerdahl, the limited resources, means of transport and communications available at the time, these expeditions were an astonishing test of endurance and physical and mental limits combined with a healthy dose of competition, intrigue, and backstabbing. I am a real sucker for these kinds of tales and museums…

Amundsen was inspired by fellow-Norwegian Fridtjof Nansen’s crossing of Greenland in 1888 and John Franklin’s disastrous British expedition of 1845-48, trying to navigate the last unknown part of the northwest passage between the Pacific and the Atlantic Oceans. The wrecks of Franklin’s ships, HMS Erebus and HMS Terror, have only been found in the Canadian Arctic ice in 2014 and 2016, respectively. Although finding the Northwest Passage was accredited to Franklin, actually traversing it was something that Amundsen completed in on his 2nd Arctic expedition (1903–06) with a 45-ton fishing vessel, Gjøa, which is also displayed at the FRAM museum.

With his Antarctic expedition of 1910–12, Amundsen was the first to reach the South Pole in 1911. His expedition ship, Fram (meaning “forward”), which had also been used by Nansen, is on display in the museum and you can even have a quick tour of its interior too. 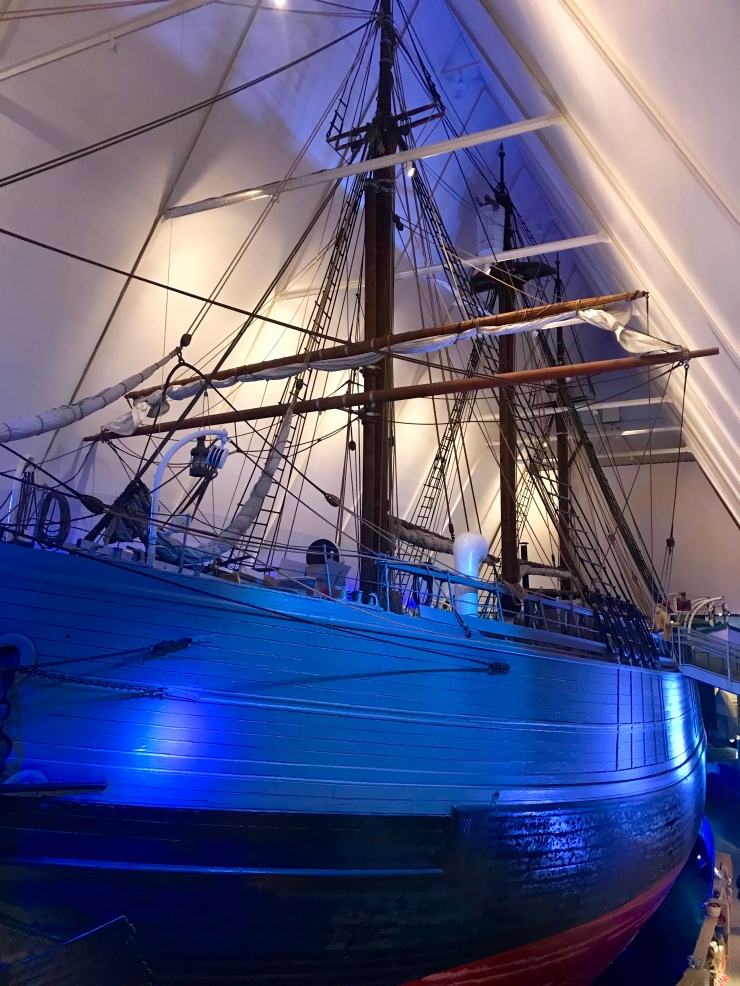 Amundsen actually planned to take an expedition to the North Pole. Finding it difficult to raise funds, and after learning that 2 Americans expeditions had claimed to have reached the North Pole, he decided to reroute to Antarctica instead. However, he was not clear about his intentions, thus misleading the Norwegian investors, government, and even his crew. Only when at Madeira, Amundsen alerted his men that they would be heading to Antarctica and sent a telegram to Scott, the leader of the British Terra Nova Expedition to the Antarctic: "BEG TO INFORM YOU FRAM PROCEEDING ANTARCTIC--AMUNDSEN" opening a potential conflict between Norway and the British. 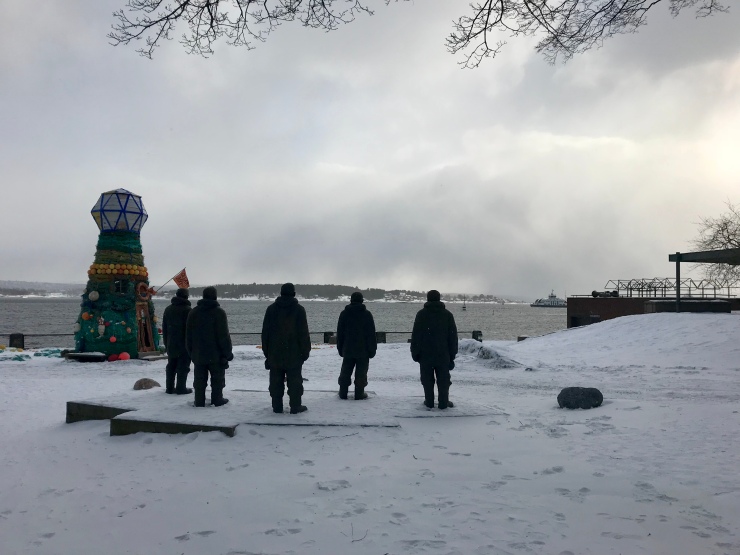 On 14 December 1911, Amundsen and his team – memorialized by the statues outside the museum, overlooking the Oslo Fjord – reached the South pole via a new route. After a couple of days of measurements, the party pitched a tent, which they called Polheim (“Home on the Pole”), as near as possible to the actual South pole as they could calculate by their observations. In the tent, Amundsen left equipment for Scott as well as a letter addressed to Norwegian King Haakon, which he requested Scott to deliver. 33 days later, Scott did find Polheim adorning the Norwegian flag. Amundsen and his team returned safely to their base but later learned that Scott and his team had died on their return journey.

Holmenkollen Ski Museum
An equally worthwhile visit is the Ski Museum and the Olympic Ski Jump of Holmenkollen, which we passed every day on our way to and from our hotel. The museum itself is not very big but does provide an excellent overview of the history of the ski (going back 4000 years!), the various techniques and materials for skis and snowboards. Also, the retrospective movies of freestyle skiing and skateboarding, and especially the utterly bonkers fashion statements of the 80s and 90s, were very amusing. The real clincher is the ski jump itself with a fabulous design that was built for the 1994 Winter Olympics of Lillehammer. 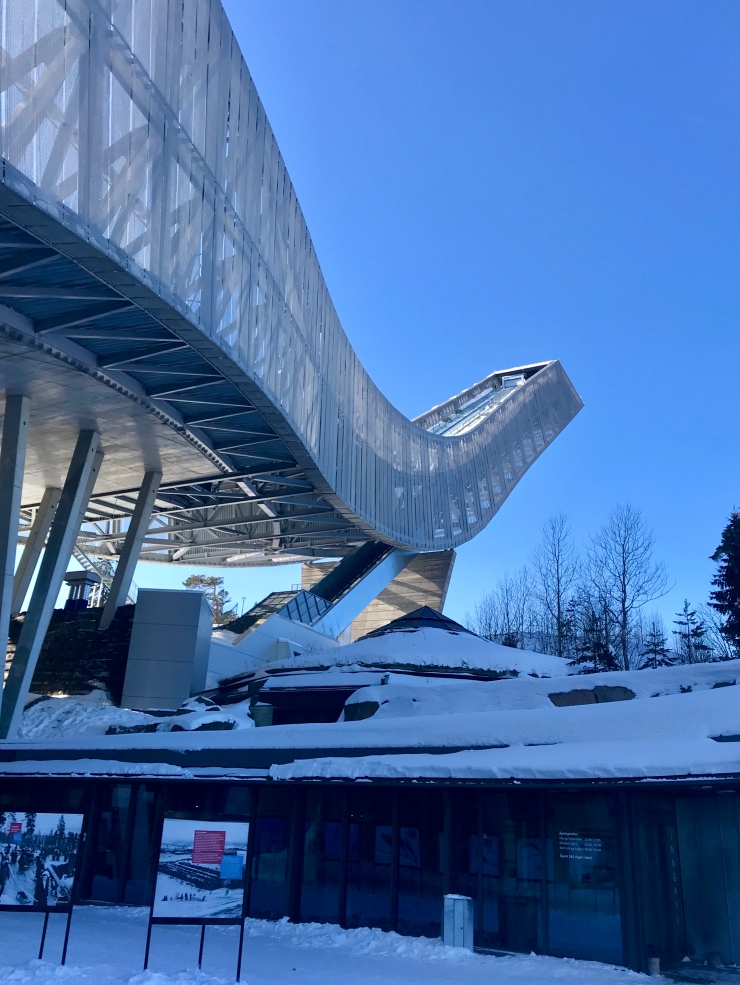 The stadium is already pretty impressive from below, the decline of the landing area is already quite steep. 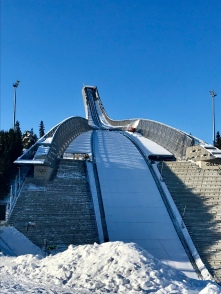 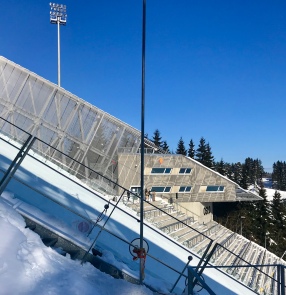 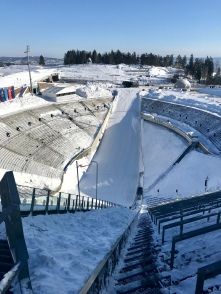 Obviously, from the top of the runway, the view is breathtaking as you don’t actually see where you would be going to land. Not for ones suffering from vertigo! 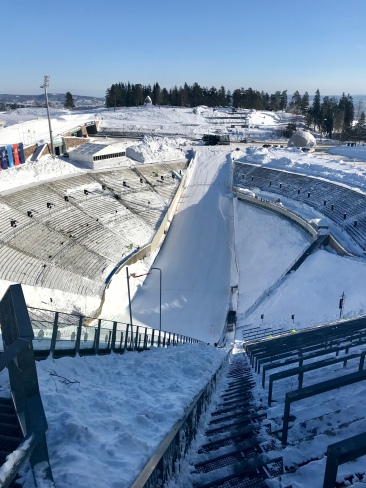 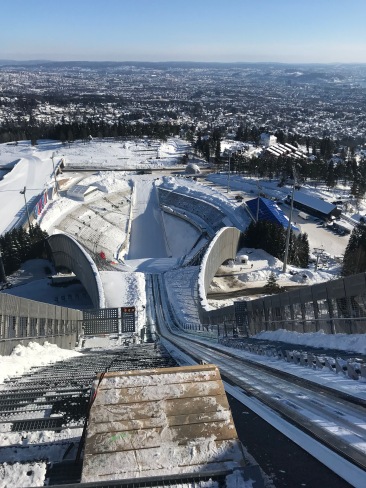 Even further up, the observation deck does provide brilliant views of Oslo and surroundings. 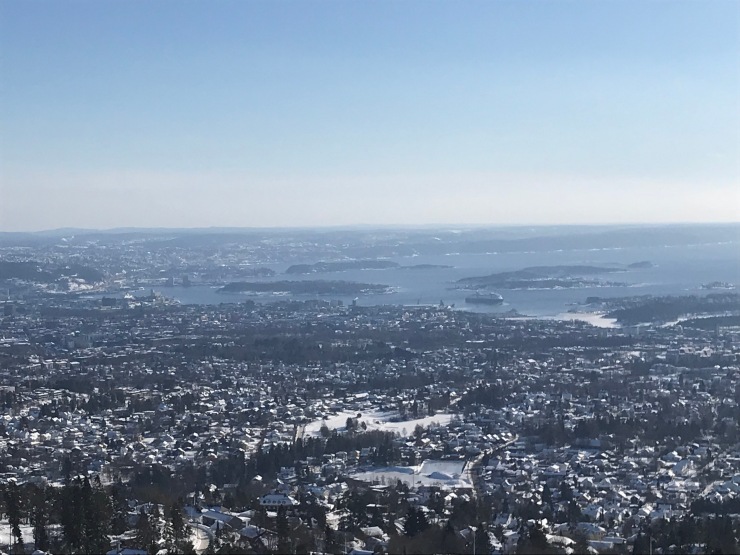 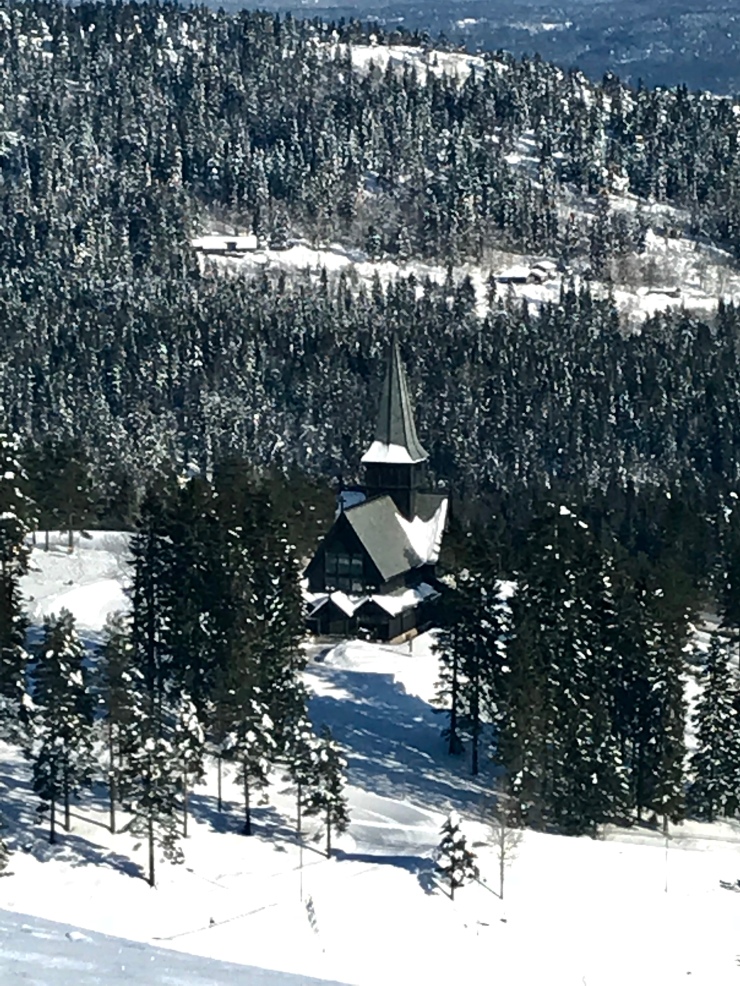