I needed to go to Copenhagen and Stockholm for work for 3 days and seized the opportunity to explore Nordic cuisine.

This first one, Restaurant Kokkeriet*, actually was an added bonus as the dinner appointment with our advisers fell through. As I had been following Kokkeriet on Instagram for some time, I tried to get a last-minute reservation there for my former boss and myself and luckily succeeded!

About Kokkeriet:
Restaurant Kokkeriet is located at Kronprinsessegade 64 in Copenhagen’s Nyboder quarter, a cozy and quiet neighborhood that originated about 400 years ago for housing blocks built for the Danish navy.

Kokkeriet opened in 2001 (as Borups Kærlighed) and is run by Sammy Shafi, owner/ general manager/Head Sommelier, while the kitchen is managed by head-chef David Johansen who joined Kokkeriet in 2008. The restaurant started off in the classic French cuisine and received a Michelin star in 2006, but then decided to change the menu to Danish food. Kokkeriet describes its cooking as all 4 seasons, based on love, understanding, and respect for the Danish gastronomy and heritage and the sincere intention to serve sublime Danish food reconstructed in the very best way. This change to Danish cuisine, however, resulted in the restaurant losing its Michelin star in 2007, but they regained it in 2009 and maintained it since.

It should be noted that just a few days after we visited, it was announced via Facebook that David Johansen will leave and the current souschef, Morten Krogholm, will take over as per April 1, 2017. Considering that Morten has worked in some of the best restaurants in Copenhagen, including Noma, it will be interesting how his take on the Kokkeriet philosophy will be.

About the menu/wine options:
There are 8-course and 12-course tasting menus (DKK 900/1.200 – € 120/160) with the possibility of an additional cheese course (DKK 175 / € 23,50). The Tuesday Special is getting a large menu for the price of the small menu, but the 4 new dishes are actually still under construction, so you will be quizzed what you think of them. Excellent idea to keep a full house on the usually slow day Tuesday and to get actual feedback from actual customers. We were there on a Tuesday, but we both thought that the 8-course tasting menu would be plenty.

About the food and drinks:
As said, we started with delicious amuses of which the liquid Waldorf salad was a real stand out: a fantastic and inventive non-alcoholic cocktail made from apple/celery sorbet ice, celery and grape juices and a couple of sprays of walnut oil. In your mind, you could just check off all the different elements of a Waldorf salad while sipping it from the Martini glass… 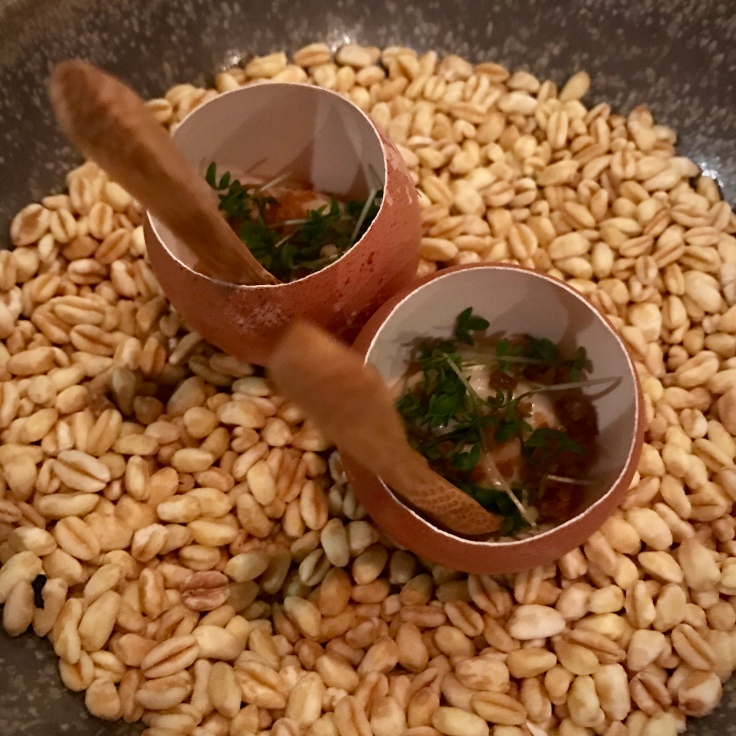 As part of the Kokkeriet cookbook, Thomas Vinterberg, the Danish director and one of the founders of the Dogma 95 collective, had written a preface, of which a part is mentioned as a quote on the Kokkeriet website:

“Humor in a becomingly serious and extremely ambitious context, as part of a well-planned sequence of servings with the aid and challenge of the best wines. Diverse, subtle and strong flavors reaching out to the farthest corners of the mouth and evoking strange associations. Celery, mushrooms, yellow peas and Brussels sprouts are recognised in the crowd. Danish classics, but here they skip, melt or crunch between your teeth, uniting with crab or duck in a way they have never done before. The familiar in the unknown.”

It is a spot-on description of the tastes, textures, and wines that seems both far apart and yet come together in the end. Some impressions:

The humorous element really came through in the meringue shards from the last dessert that were made with activated charcoal, turning one’s teeth and tongue black, resulting in much laughter at the various tables.

I got delicious glasses of Apple/Thyme, Apple/Celery, Apple/Ginger, Fresh Grape, and Fresh Cranberry juices and was quite surprised about how well they paired with the food. Although the juices had some more sweetness and different acidity than you would generally find in wine, it was an enjoyable experiment.

The best dish of the day was the quenelle of beetroot tartare with spring onions, and truffle vinaigrette finished with hay cream, tarragon, and shiso leaves. It was just stellar. There were some minor things slightly off. We both thought that the langoustine, kale and ham dish was as a bit disjointed as the flavors were too far off. The pork cheek was a bit salty for our taste as it almost leaned towards corned beef.

However, the overall experience at Kokkeriet was an enjoyable one: adventurous food and wines (the Canadian Baco Noir was an astonishing and vibrant wine), beautiful plating combined with a very professional service that is both personal and relaxed.

3 replies on “Around the World – Restaurant Kokkeriet*, Copenhagen, Denmark (March 2017)”