Food connects people all over the world. Our visit to Hillside Supperclub in San Francisco was a prime example of that as it was only a couple of months earlier that I met Tony and Austin Ferrari at the communal table of Oaxen Krog** in Stockholm while on a business trip.

The Ferarri brothers told us that they operated a small neighborhood restaurant in San Francisco, and standing invitations to drop by were extended. Shortly after that, I was planning our summer holiday to the Pacific Northwest of the United States. As Koen and Erica coincidentally made a road trip of Pacific Southwest around the same time, we managed to plan a one day overlap in our itineraries in San Francisco. I already had a particular restaurant in mind where to meet up…

About the restaurant:
Hillside Supperclub is located at 300 Precita Avenue on the corner with Folsom Street in the Bernal Heights neighborhood. It actually started off as a pop-up project in 2012 together with chef and co-owner Jonathan Sutton, Tony’s classmate in cooking school, but was made permanent in January 2013 due to the great response they got. They landed on Zagat’s “30 under 30” list in 2014, a prestigious list highlighting young culinary professionals from all over the US.

The restaurant’s tagline “come as strangers and leave as friends” is definitely not just some hollow marketing phrase. It has a very laid back setting, attracting all kinds of guests, and you really feel welcomed here.

UPDATE: In the increasingly challenging environment to live and run a small neighborhood restaurant in San Francisco, many restaurants called it quits. Unfortunately, the COVID-19 lockdown was the final push for Hillside Supperclub as well. Sadly, Tony and Jonathan had to decide to not reopen the restaurant and have relocated to their respective hometowns. Tony and Austin maved back to Cincinatti, OH where they are involved with the neighbourhood coffee place Mom and ‘Em as well as the museum restaurant Fausto at the CAC. Jonathan will move back to Bellingham, WA and have/will open Storia Cucina, where some of the dishes served in the Hillside Supperclub (and their sourdough starter from 1973!) will find a new home. 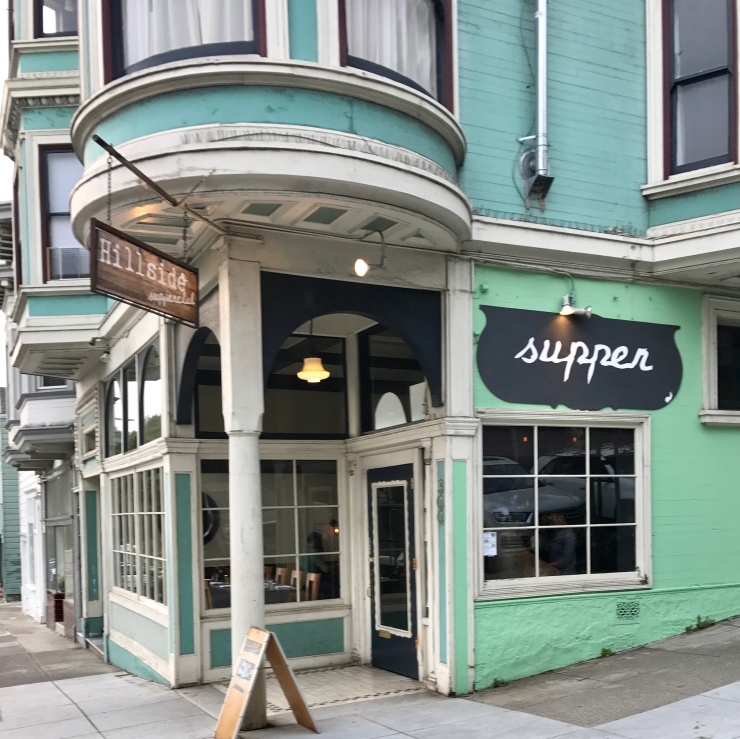 After the dinner in Stockholm, I found out that both their ventures and backgrounds were quite impressive: Tony received a grant from the James Beard Foundation to study in Thailand and worked at SF’s one Michelin-starred Acquarello. Austin worked at Berkeley’s Chez Panisse, tutored by maître d’ and wine director Jonathan Waters and official sommelier. Furthermore, they are quite the entrepreneurs: besides Hillside Supperclub, they also opened a coffee shop, Provender Coffee (1415 18th Street SF), in 2015. In their hometown of Cincinnati, Ohio, they just kicked-off with Ferrari Barber & Coffee Co., revamping the barbershop that their grandfather and great-uncle opened in the 1950s with the addition of a coffee shop.

About the menu:
As you will see, we managed to order a lot of the items that were on Hillside Supperclub’s menu that day, which consisted of 8 starters, 4 mains, 4 desserts, and some off-menu specials. Their passion for casual, rustic, and traditional cooking resonates in the market-driven menu with sustainable, seasonal produce and ingredients. They also take pride in cultivating a network of local purveyors and host monthly themed dinners showcasing the products or their suppliers.

The fact that the portions are European style (i.e., not huge as we actually managed to complete a 3-course dinner!) did trigger some comments on various review sites that the food was overpriced, but in our experiences in San Francisco, Seattle and Portland, they are definitely on par with similar types of restaurants.

Their wine list is a mix of both European and West Coast US wines, with a lovely selection of French Chenin Blancs and Pinot Noirs. Wines are available from about USD 35 a bottle (and upwards with a “specials” winelist available on request).

The food and drinks:
Awaiting the others to arrive from Oakland, we started off with some delicious – still warm, crisp, yet very fluffy – focaccia bread.

We also ordered a glass of Rosé Crémant de Loire, a sparkling Cabernet Franc made by Château de Brézé, from Saumur, France. Both were gladly ordered again once everybody had arrived.

Being that night’s “guests of honor”, we also got the Anchovies and Meatballs starters as additional sharing plates on the house. Those dishes didn’t disappoint either, especially that magnificent tomato sauce for the meatballs! It does without saying that the recipe comes from Nonna Ferrari…

The kids enjoyed the NY steak and plates of home-made mushroom ravioli in cheese sauce (not pictured).

Too bad that Tony and Austin had to leave mid-service to catch a flight to Cincinnati. With the diversity of our main dishes, I could have used Austin’s expert advice on the wine pairings. Eventually, we decided on two great wines from up-and-coming Californian winemakers. The fresh and crisp 2016 Jonquille Viognier from Jennifer Reichardt’s Raft Wines and a surprisingly light and refreshing 2015 Familiar Mourvèdre from Hardy Wallace’s Dirty & Rowdy Family Winery.

Across the board, the food was excellent; nicely balanced, and seasoned. Only small critiques would be that the chocolate fudge cake turned out just a tad dry, and the pot pie lids were tucked in slightly uneven and therefore were not entirely cooked through in places. We had a splendid evening, and it was great seeing the Ferrari brothers again. Alas too short, but I hope to be able to welcome them to Amsterdam in the future!