Around the World – Lanzarote (part 2)

Looking back on our holidays in Lanzarote, there were 3 main characteristics of Lanzarote: Lava, great food and drinks and César Manrique.

More on him and the attractions on Lanzarote he has been involved in a next blog, but let’s start off with the first three.

The landscape of Lanzarote has for a large part been characterized by several major eruptions of volcanoes between 1730 and 1736 that turned a big chunk of the southwestern part of the island to lava fields. Consequently, the Parque Nacional de Timanfaya indeed offers otherworldly landscapes and there are many attractions on the island that are connected with lava: grilling over lava holes at the El Diablo Restaurant, Cueva de Los​ Verdes, the world’s longest natural lava tunnel, and the impressive lava cave at Jameos del Agua. 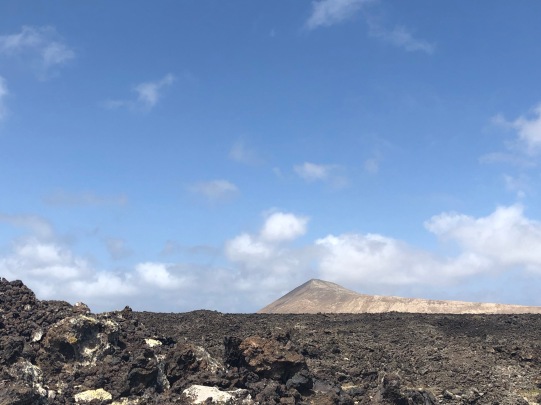 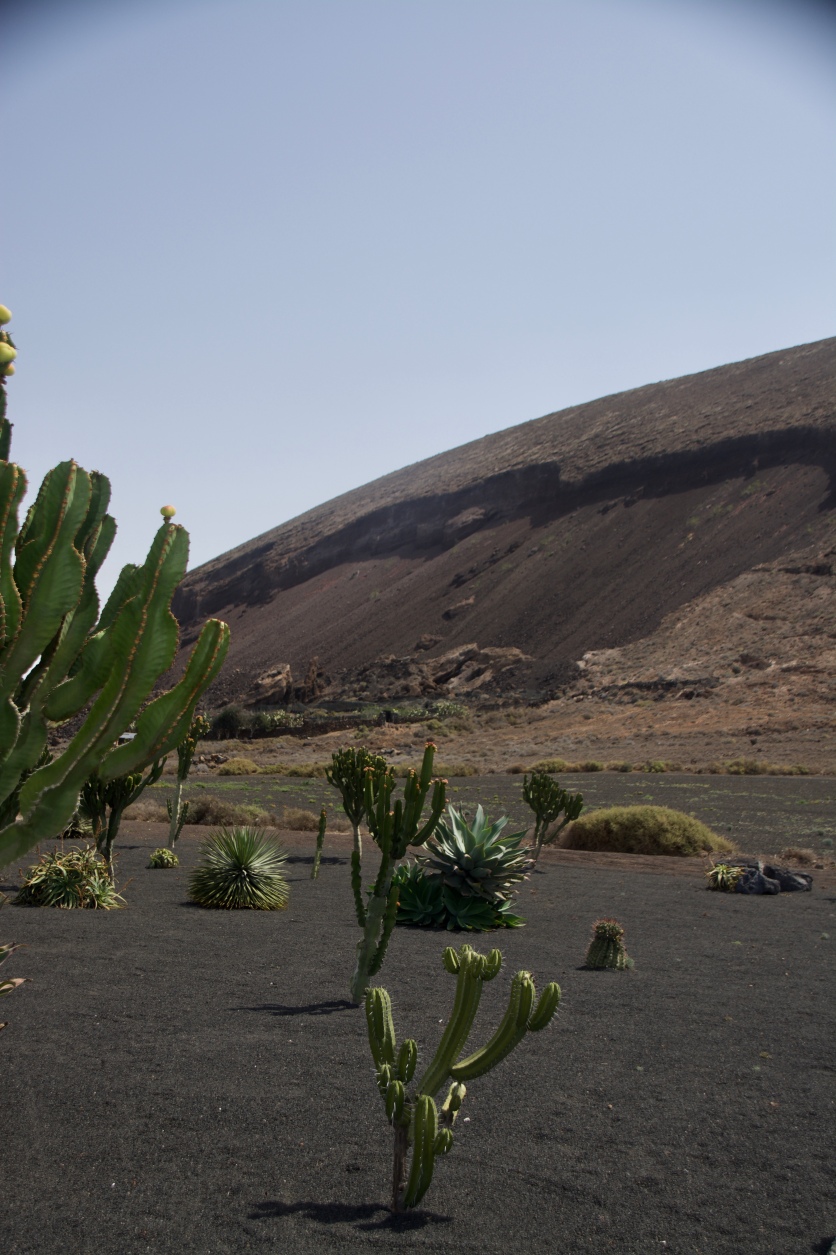 Lava Rocks on the sandy beaches of Famara

The bulk of the local wineries are located in the middle of the island in a triangle that stretches between Tinajo in the north to Yaiza in the south and San Bartolome in the east, with the most spectacular Bodegas around La Geria. The vines need to grow on the ground due to the strong winds, so they are planted in a hole in the black soil and are protected by low semi-circular stone walls which provides for spectacular vistas and lunch spots in the valley along the LZ-30.

View from the restaurant at Bodegas Rubicon 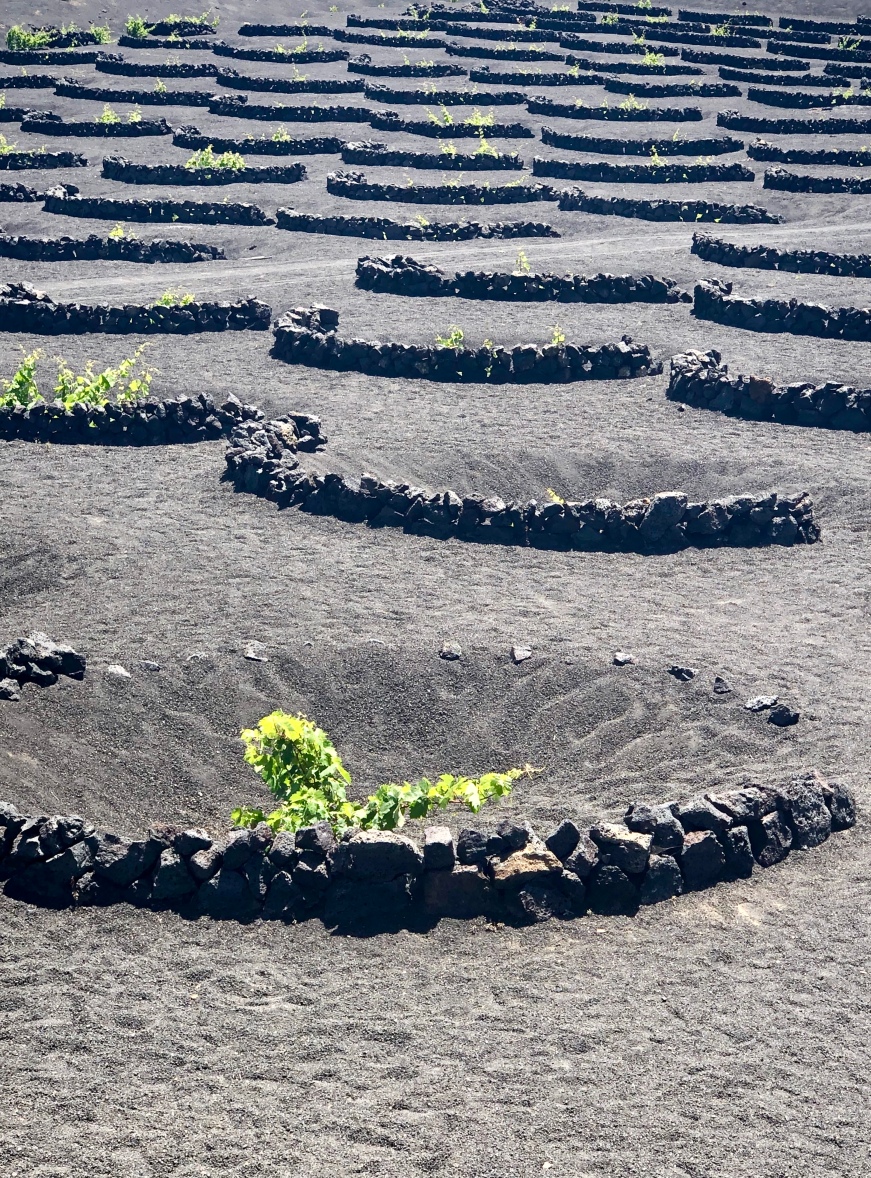 How grapes are grown in Lanzarote

The main local white varietal is the Malvasia grape. The white blends are crisp and fruity, but you’d best drink them cold; the 100% pure malvasia ones have more depth. There are also some reds, mainly Syrah, that are grown on Lanzarote as well. We visited 2 of the 15 or so vineyards on the island: Stratvs (their Malvasia Seco and the Moscatel liqueur made it back home) and next door’s Rubicón (we had their Amalia Malvasia Seco during lunch) are recommended, but we had other wines from El Grifo, La Geria and Vega de Yuco and they were very nice too. More information on the local wine and wineries can be found at the DO Lanzarote site.

Is it all wine down there? Nope, they have some very nice local craft beers too. We tried several from NAO, Los Aljibes de Tahiche and Malpeis Breweries and they didn’t disappoint! 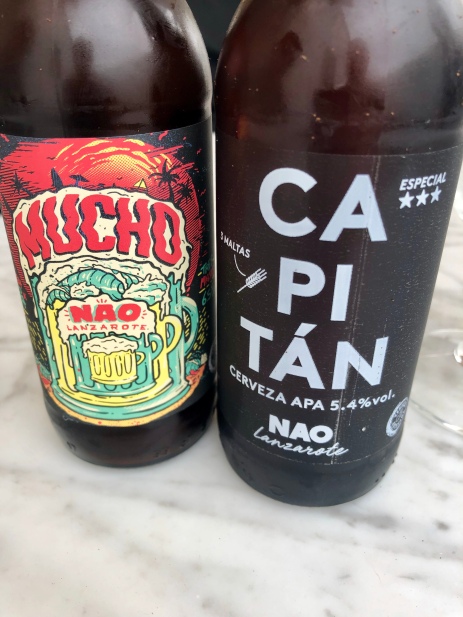 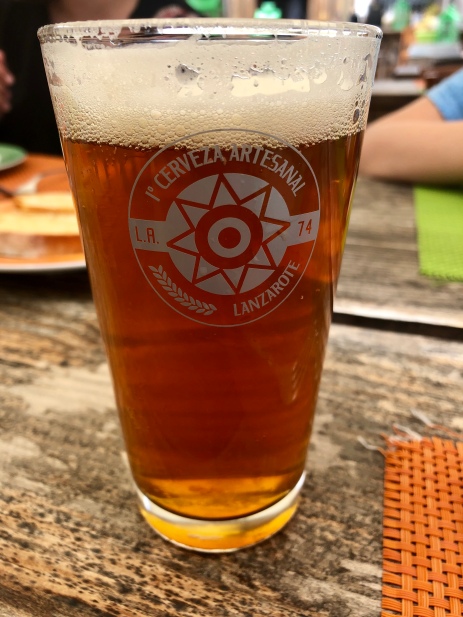 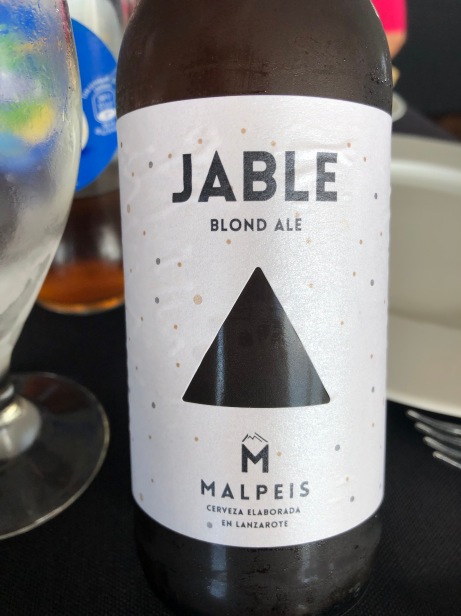 Furthermore, I got to browse the supermarkets for special Spanish beers that we won’t be able to easily find in the Netherlands. Estrella Damm had some very interesting brews on offer: The 4.8% ABV Inédit was introduced 10 years ago, as a collaboration with Spanish culinary masters Ferran and Albert Adrià, intended to create a gastronomical beer that was able to be paired with the lavish dishes in their legendary El Bulli restaurant. The mix of malted-barley beer and fresh wheat beer is infused with coriander, licorice, and orange peel. That gives it a certain complexity, but its versatility still makes it one of my favorite Spanish beers.

The 2019 Malquerida is another collaboration of Damm brewmasters with the Adrià brothers. This time a very fresh beer with just 5% ABV infused with orange and Jamaica flowers. Ideal for hot days and pairing with Latin food.

The special edition 6.6% ABV 2019 Complot IPA followed efforts back in 2014 to grow a new hop varietal near Prades, in Spanish district of Tarragona, about 50km to the west of Barcelona. Therefore, this beer is advertised as a MIPA, a Mediterranean IPA, but as it is paired with 7(!) other hop varietals, you don’t necessarily get a distinct flavor from the Nugget, but at 47 IBU, it is pretty bitter and hop enthusiasts will surely appreciate this beer. 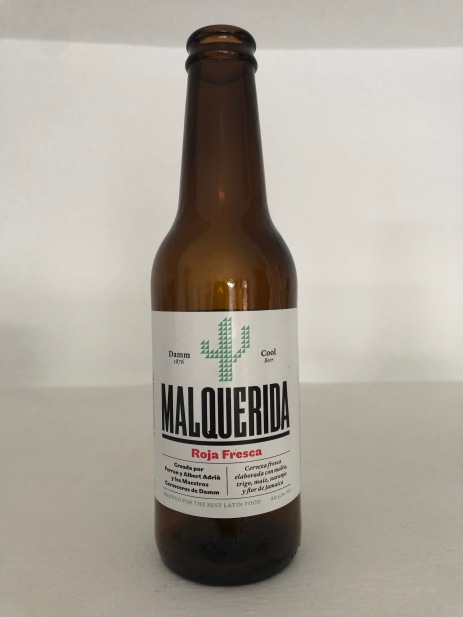 From a culinary perspective, you can find different kinds of cuisines in Lanzarote: the usual international suspects in the touristy spots, but there are still loads of restaurants that serve traditional food and tapas.

Local cheeses, mainly from cow and/or goat’s milk, are on the menu of all self-respecting restaurant in Lanzarote. The harder cheese versions – that also come coated with smoked paprika or gofio (milled cereal wheat) – are usually part of a cheese board and are served with membrillo (quince jelly). The softer cheeses have a lighter, ‘squeakier’ texture, somewhere between feta, halloumi, and paneer cheeses.

Cheese Board and Bruschetta @ Cantina Teguise

Those ones are often griddled and served with the staple condiments of the Canary Islands: Mojo Rojo (red pepper/paprika sauce) and Mojo Verde (green pepper, coriander or parsley sauce). The more spicy Mojo Picon is also available which get its name for a higher content of pimienta picona peppers. These mojos are also commonly served with fresh bread rolls at the beginning of a meal and with another standard menu item: papas arrugadas con mojo (“wrinkly potatoes” cooked in seawater). Allioli (garlic and olive oil emulsion with mayo-like consistency) can be found as a condiment as well. Not entirely local, but salsa chimichurri is also commonly served with grilled meats. 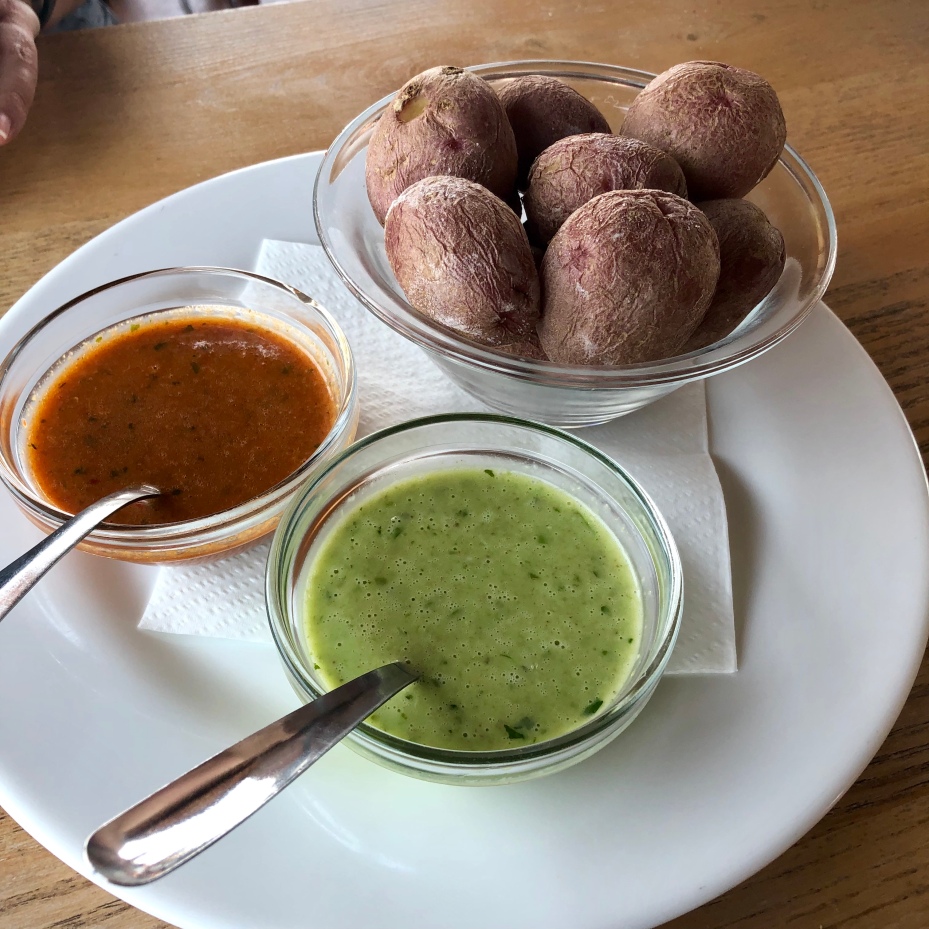 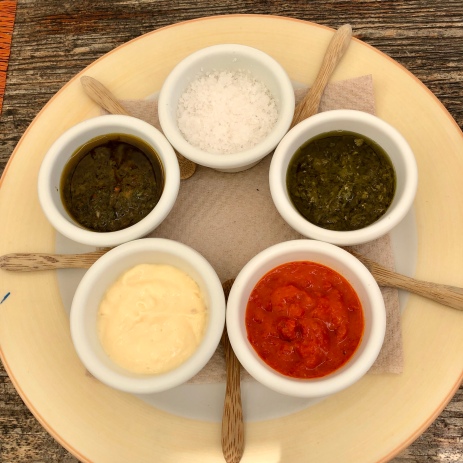 They sure like to grill meat on Lanzarote (Los Ajibes in Tehiche and La Vaca Loca in Costa Teguise were great steakhouses), but obviously fresh fish is abundantly available too. We had some excellent Fritura de Pescado (squid, shrimps with catch of the day fillet of fish) as well as fresh tuna dishes in the quaint fisherman town El Golfo (@Casa Rafa Restaurante De Mar).

Not to worry, vegetarian options are also available besides the obligatory salads. In the surf hotspots like Caleta de Famara, you have some entirely veggie and even vegan restaurants. With Morocco nearby, the North-African influences are clear in chickpea-based stews as well. Be aware that portions, in general, are very generous. Ordering two starters had proven to be enough several times. The best example was the delicious fried aubergine with black honey that Chantal ordered at Los Aljibes. We were pretty sure that it was an entire aubergine!

We got this “black honey” served several times during our holidays but unfortunately couldn’t find in shops as such. Therefore, I don’t know it refers to eucalyptus honey (which is pretty dark), honey from the indigenous black honey bees (Abeja Negra Canaria), Miel de Palma, dark syrup from the Canary Island palm tree or even Miel de Caña, plain cane sugar syrup/molasses.

Most interesting flavor combination: The “Hot & Cold” dessert at Cantina Teguise: artisanal Pistachio Ice Cream with huge chards of locally made chocolate that was laced with chili flakes. Definitely more hot than cold, but it was so delicious. 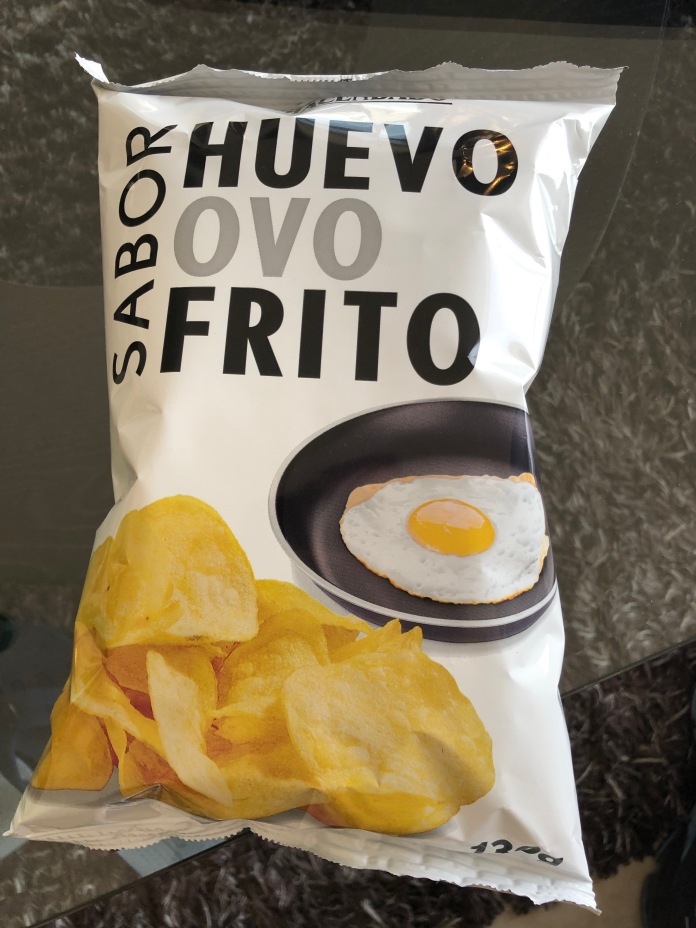 Most divisive flavor: the Huevo Frito crisps that I got at the Mercadona supermarket. They taste exactly like the crispy edges of eggs fried over high heat. Some of us loved it, some of us were disgusted, and even though these ones don’t contain any egg at all, some of us even invoked their egg allergy in order to not try them at all!