We have been trying out some fine-dining restaurants that were already quite some time on our “to-do” list.

We had selected some restaurants for lunch that were a bit further away from where we live. After Restaurant De Burgemeester*, the next one up was ‘t Nonnetje** in Harderwijk, a 50-minute drive from Amsterdam.

About the restaurant
After stints in various renowned Dutch restaurants, Michiel van der Kroft achieved the SVH Masterchef title, the highest level of proficiency for cooking in the Netherlands, in 2005. He’s been at the helm of ‘t Nonnetje since 2006, where he regained its Michelin star in 2008. The second Michelin Star followed in 2015 as did the 2016 Dutch Chef of the Year award and 17½ out of 20 points from Gault&Millau.

From a wine perspective, the level of proficiency matches that of the kitchen, with Edger Groeneveld achieving the SVH Winemaster title earlier this year. He previously worked for Het Koetshuis* in Bennekom, during which he was awarded the 2016 Dutch Sommelier of the Year accolade.

The restaurant is located on a corner of the Vischmarkt in the historic center of Hanseatic city of Harderwijk. The cozy building has a veranda with 4 smaller tables, and inside there is room from approx. 16 guests and 2 larger tables on a split level that leads towards the compact kitchen. The mural by famous tattoo artist Henk Schiffmacher is a real eyecatcher.

About the menu
The menu has a distinct Portuguese influence, which makes sense as Michel’s wife, Maria do Céu Ferreira Figueiredo, is from Portugal, and he considers the country his second home. This is also reflected in the wine list, which for the rest is predominantly European, focussing on smaller producers, forgotten varietals, and biodynamic wines.

Besides the à la carte menu, there are 2 main special menus.

We had the fixed 3-course Restaurant Week menu and opted for the additional course (the dim sum and beetroot dishes). Two vegetarian main dishes came from the Botanical Temptation menu, but the starter, the deconstructed Gazpacho, seemed to be an off-menu item. Our dessert came from the main Temptation menu.

About the food
We got off on a bit of a rocky start as somehow an incorrect sequence of dishes was started. The first amuse hit the table as soon as we got seated and before the menu was even explained and aperitifs were ordered. Just after our champagne was served, the second regular appetizer came… and went back to the kitchen and later on various last-minute changes of cutlery were needed. Nevertheless, the overall service was still very good, and the staff was amicable and knowledgeable.

We opted for a glass of champagne, Roger Coulon’s Premier Cru ‘Heri-Hodie’ Brut (€ 17,50), with the oyster as an additional course for €8,50 (the vegetarian alternative was €7,50). The Gin & Tonic Oyster arrived a couple of minutes later, unfortunately, had a piece of shell which resulted in a mouthful of grit when it ended between my teeth. The replacement one was plump and delicious, though.

One hospitable aspect of ‘t Nonnetje that we really liked is that after a (proper) introduction of the wines – which turned out to be excellent pairings – the bottles were left on the table. Consequently, you could check the labels if you wanted (we figured that we were not supposed to refill our glass ourselves…). Similarly, also the terrific sauces stayed on the table so you could finish the whole dish with as much sauce as you liked (yay!).

In our view, the Chocolate and Pineapple dessert was good but could have used some more acidity. However, the rest of the dishes were absolutely top-notch. The original and intense flavors already started with the appetizers, especially the delicious broad bean sorbet. Furthermore, we were so glad to have selected the additional course as both were the highlights of our meals. Excellent dim sums, but that spicy carrot sauce was out of this world. Similarly, the beetroot dish was arguably one of the best vegetarian ones Chantal ever had.

Not pictured, but we did share 1 cheese board of Dutch and Portuguese cheeses. Oddly, no choice was given on the selection/preferences from the 10 or so cheeses on the trolly, but it turned out to be a nice selection of 4 different cheese (a Portuguese Goat/Sheep milk cheese, a Dutch very strong Gorgonzola type of Cheese and a delightful Mont d’Or, the first of this season). The cheese board was served with typical, slightly cinnamony, local bread from Harderwijk, candied pecan nuts, and marinated grapes. Due to the wide selection of cheeses, the wine pairing is actually 2 interesting wines from Domaine Dugois. A classic Arbois Chardonnay (Terre de Marne), as well as their fortified Macvin du Jura (unyeasted chardonnay grape juice is mixed with Marc de Jura and then aged in barrels for 3 years). 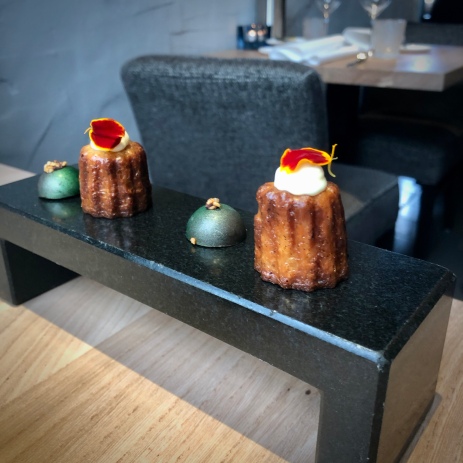 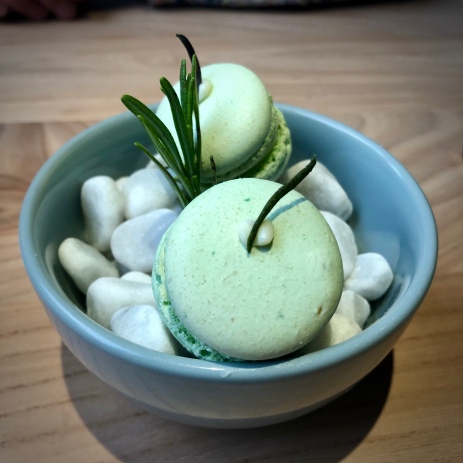