I think that there were only 3 minutes between reading about the restaurant collaboration event between RIJKS from Amsterdam and Locavore from Ubud, Bali and booking my table…

We have been to Locavore before, so this was also the ideal opportunity to check out RIJKS* which was already on my to-visit list for quite some time.

About the restaurants:
Locavore, led by classically trained chefs Ray Adriansyah and Eelke Plasmeijer, create unique, inventive and modern European fine dining dishes based on hyper-local sourcing of seasonal ingredients. We visited Locavore whilst on holidays in Bali in the summer of 2015 and were completely blown away by the food (and cocktails), even our kids loved all the food they were served. It was no surprise to me that their efforts were soon rewarded by a place in 2016’s Asia’s 50 Best Restaurants (at #49) and they were the biggest climber in the 2017’s edition moving on up to #22.

RIJKS* is the fine dining restaurant of Amsterdam’s famous Rijksmuseum. The restaurant is under the direction of Executive Chef Joris Bijdendijk who worked among others as souschef at Le Jardin des Sens*** at Montpellier, France. In 2012 he became head chef of Bridges in Amsterdam where he managed to get the restaurant its Michelin star as well as receiving a personal accolade as Gault&Millau’s Talent of the Year in 2014. Joris took his current role at RIJKS as the Rijksmuseum reopened after lengthy reconstruction late 2014 and the restaurant been awarded 16 Gault&Millau points and got its first Michelin star in 2016.

On their site, the intro about the restaurant claims that RIJKS is the Rijksmuseum served up on a plate, telling the story about the Netherlands, its influences from countries far and near. They indeed adhere to that in the menu, the wine list has an abundance of wines from the Netherlands or from Dutch winemaker’s abroad and they only have Dutch spirits. Furthermore, RIJKS started hosting events every couple of months with renowned guest chefs, similar to a guest curator in the Rijksmuseum. The chefs they were able to get so far are pretty amazing as they represent top-notch restaurants all over the world:

About the menu:
This collaboration was a 3-day “quatre-mains” between Joris and Ray/Eelke and we visited for lunch. The 6-course lunch menu (€77,50) was nicely balanced with RIJKS and Locavore each taking care of 2 of the snacks, 2 main courses, and 1 dessert dish.

There was an option to have a wine/cocktail pairing for each course: 5 glasses being served of which 3 cocktails to go with the Locavore dishes and a white and a red wine to go with the RIJKS main dishes (all €10 per pairing). I only had the wine pairings and sips of the cocktails as Chantal opted for the full pairing.

The food and drinks:
We started off with a glass of nice Delamotte Brut champagne (€15 a glass) to accompany the 4 very diverse snacks (depicted clockwise): 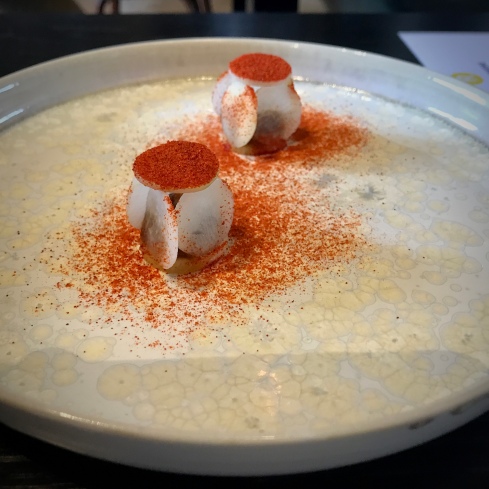 The first course was for the account of Locavore:

Next up was RIJKS. The wine pairing was a nice and crisp 2016 Riesling from Apostelhoeve (Maastricht, The Netherlands)

A vegetarian dish by RIJKS: “Ode to Dutch Beans” followed.

The dish consisted of 2 preparations of goat, being Sate Buntel (satay made from minced meat that is wrapped around a bamboo skewers or in this case a bone) served with a silky smooth Smoked Aubergine Puree and Nasi Bakar (spiced fried rice wrapped in banana leaf and which is then finished on a grill) and a Kalio (the final stage of a Rendang before the coconut milk has been fully absorbed by the meat) served with Atjar and “Ketchup”. Incredibly tender meat and amazing flavors!

The (pre-) dessert was for the account of RIJKS:

We concluded the menu with Locavore’s “Es Buah”, which originally is an Indonesian iced fruit cocktail dessert. It was indulgent whilst refreshing at the same.

We finished with coffee/tea with friandises (EUR 8 per person):

About the food and service:
The chefs and kitchen brigade clearly had fun in the kitchen during service and that clearly showed on the plates as well. The food was absolutely delicious, diverse, surprising and beautifully plated. With the first bite of the ceviche and sip of the Locavore cocktail, I could really picture ourselves back in Bali!

However, if you advertise it as an RIJKS x Locavore event, it is rather disappointing that you don’t mention at all that the 2 main courses on the vegetarian menu are not from Locavore. As said, the alternatives from the regular RIJKS menu were very tasty too, but consequently, their pairings with the Locavore cocktails were far from ideal. Regular wine pairings would do them more justice. As such the pairings with their intended dishes were good, but we thought overpriced in relation to the rather skimpy quantities that were served: the dessert cocktail even came in a small liqueur glass with an ice-cube in it.

Hopefully, the erratic  – although very friendly – service can be attributed to it being the first service of the event. Knowledge of the dishes and ingredients seldom exceeded what was mentioned on the menu leaflet already on the table and the pace between courses and with the pairings was totally off. For example, we hadn’t even finished with the second snack and the third and immediately thereafter the fourth was served. The pairings arrived too early, too late, partially (only for Chantal instead of for both) or not at all (the digestive that Chantal ordered) which caused the bill to be incorrect too. It may have been the high bar set by having visited 4 other (multi) Michelin starred restaurants in the past month, but also from experience one should be able to expect a more seamless service at this level.

Enough nitpicking: on balance, the concept of guest chefs is great and RIJKS x Locavore event worked out splendidly from a food perspective and that still is the most important element. Looking forward to the next collaboration: Dan Hunter from Brae!