Another collaboration at RIJKS*; this time a 1-day event with Australian chef Dan Hunter of Brae Restaurant fame.

About the restaurant(s)
For an introduction to RIJKS, I refer to my earlier post on their collaboration event with the Balinese restaurant Locavore.

Dan Hunter started his cooking career in Melbourne in the early 2000s and spent a couple of years in Spain, culminating in an appointment as Head Chef under Andoni Luis Aduriz at Mugaritz (2005-2007) which at the time resided (and still resides!) in the top-10 of best Restaurants in the World.

Upon his return to Australia, Dan led the kitchen of Dunkeld’s Royal Mail Hotel, where he developed his first organic kitchen garden program and reached a Three-Hat status, the Aussie equivalent of Michelin Stars awarded by The Age Good Food Guide.

Late 2013 Hunter started Brae, his first own restaurant, in a farm in regional Birregurra, Victoria, about a 90 minutes’ drive from Melbourne. With 30 acres of vegetable gardens and orchards, Brae is fully committed to sustainable farming, using ethically grown seasonal produce from the surrounding land and local farmers. Combined that with contemporary cuisine, it was only a short time before the accolades came in. In 2016, Brae jumped an impressive 22 positions from the 87th spot to 65th in the San Pellegrino’s World’s 50 Best Restaurants, marching on another 21 places to the 44th spot in this year’s edition. In the 2017 edition of The Age Good Food Guide, Brae kept its Three Hats and was award as Restaurant of the Year Award.

This event on May 28 was part of Dan’s “world tour” promoting the Brae: Recipes and Stories from the Restaurant cookbook published by Phaidon. Providence in Los Angeles, In Situ in the San Francisco MOMA and Contra in New York City, were earlier stops so far.

About the menu
The 6-course lunch menu was split equally between RIJKS and Brae. Wine pairings were available at EUR 10 a glass for 5 of the courses. Compared to last time, the rations were luckily a fair bit larger. Chantal opted for the vegetarian menu, hoping that the vegetarian dishes were more evenly distributed than previous time. Quod non…

The Food
We paired the amuses with a glass of Delamotte Brut Champagne (€ 15). 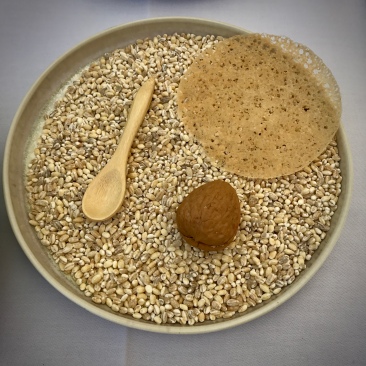 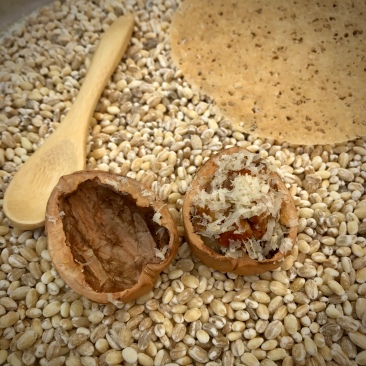 Aptly described this dish was an exploration of flavors of greens and sea vegetables (like Oysterleaf, the crispy Ice Plant leaves, and buds and I believe some Shiso leaves were in there too) that went with the olive oil poached tomatoes and the mussel juice-based “seawater” dotted with the tomato vinaigrette.

Both dishes were paired with Apostelhoeve 2016 Cuvée XII, a Müller-Thurgau, Auxerrois and Pinot Gris blend (Maastricht, The Netherlands)

Amazing flavors in this aged duck, which received a honey rub before the spice crust (fennel, coriander, cardamom, pink peppercorns) was added. The duck jus and brown butter are purposely split and had an incredible depth of flavor adding to the raw kohlrabi.

This signature dessert featured a deep-fried parsnip crisp cone resting on top of parsnip and apple mousse and a drizzle of chamomile infused apple caramel, surrounded by pieces and a grating of dehydrated apple. Amazing dessert and crunch!

Despite all the food being absolutely fantastic, it was again disappointing that the vegetarian option for Brae’s dishes was not theirs (although not entirely sure on the first course). We were actually both quite surprised that Chantal got different dishes as there were only 1 or 2 non-vegetarian elements in what otherwise would have been cracking vegetarian dishes on a standalone basis. Furthermore, two of the RIJKS’ original/replacement dishes – the Gazpacho and the Salt Crust Swede – were precisely the same as she had at the RIJKS x Locavore event 2 months earlier. All the dishes still tasted great, but that is not why you want to attend such a unique collaboration event.

The lunch itself was a hefty €137,50, so with wines, water, and tea (no friandises were even offered), we ended up at €225 per person. A small consolation was that it did include a signed copy of Dan’s beautiful book, and it contains the recipes (or variation thereof) of the dishes he served that day.