Once in a while, I will make a batch of pesto myself and when properly stored under a layer of oil (still need to explore the ice-cube mold in freezer method), it lasts us about 4-6 weeks. At most.

As I mentioned in my previous post, my choice of recipe caused me to inadvertently spend most of my Sunday in the kitchen. The problem started with the 190g jar of pesto mentioned in its “shopping list” as we always have issues with store-bought pesto.

Most of them have textural issues (grainy, sticky, overly oily) or – usually the cheaper ones – they have loads of ingredients that should not be in a proper Pesto Alla Genovese, so they typically end up having a bland flavor and the basil is nowhere to be found. Every time we find a new brand in the stores, we end up trying it and are almost always disappointed. The one we find least objectionable is Sacla’s, but their recent move to put in a squishy bottle instead of the jar does not really help. As I still needed to do some shopping, I decided to make a batch of pesto myself.

Plenty of recipes around, but I am always looking for the ratios to decide whether it could work from the start and get that great consistency straight away and not need to tweak it. The last recipe I made was the “official” recipe for pesto alla genovese (obviously not with the DOP basil and garlic, but the rest of the ingredients are relatively easy to get here). Right ratios and texture, but we found it way too salty; 10 grams should have rung some alarm bells!

I ended up at Serious Eats due to their tested and tried approach. Their recipe and preparation of the pesto itself stay close to the official method. What also triggered me was the comment “Still, if you want to use a food processor, you will end up with a very good pesto using this ratio of ingredients”. As I knew that I would have loads of basil, I decided on a side-by-side comparison.

What worked and what didn’t:
I started with the good old pestle and mortar pesto and was quite surprised about having to use 4 garlic cloves as the more traditional recipes call for 1 or max. 2 cloves for a similar ratio of basil, cheese, and pine nuts. I decided to go with it, and that was a bad idea… I like garlic a lot and am very much used to more pungent garlic as I almost always grate it with a Microplane instead of chopping it. However, using the pestle and mortar and a bit of salt to start it off turned out to maximize that effect to a level that the pesto was almost inedible. The garlic completely overpowered it. Terrible waste of elbow grease as the texture was really good! 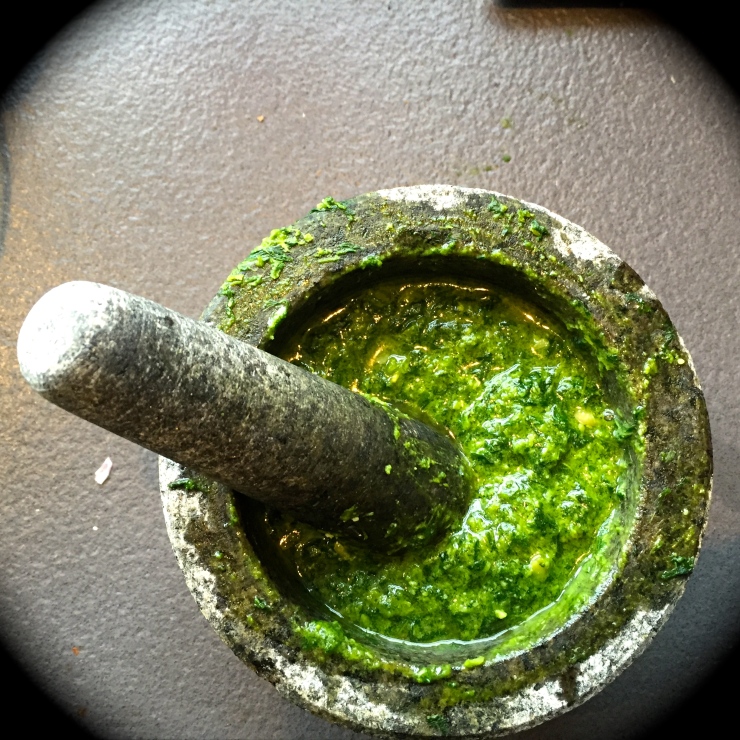 I used the same measurements – with the obvious exception of the garlic that I reduced to 2 medium cloves – for the food processor version. It’s so easy: pulse the garlic, salt, and pine nuts together first, then add the cheese and follow with the basil; stir in the oil slowly. The only difference on how I usually make it was that they added the cheese before the basil, but I could not discern a significant difference to the result. I have to fully agree that with using the food processor you will end up with a very good pesto, but it’s no match to the texture of the pestle and mortar version. 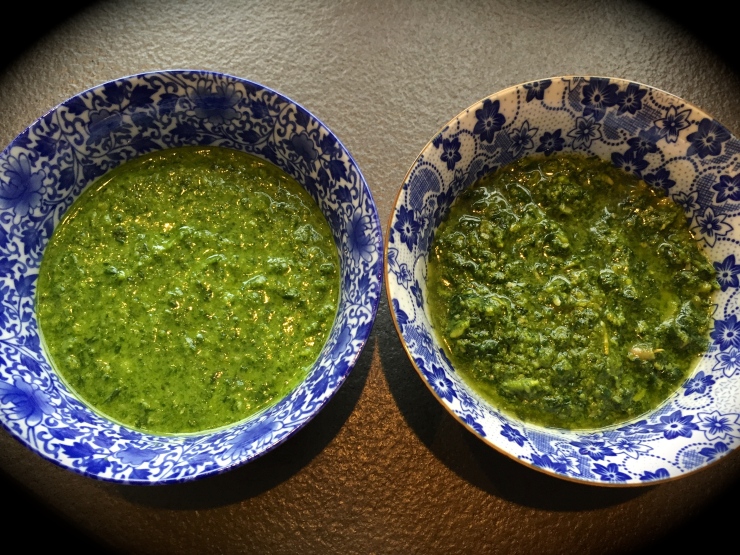 So, that left me with the dilemma which one to use for the lasagna… “Luckily” there was still a jar of bland store-bought pesto in the fridge that I could use mix and tone down the garlic in the pestle and mortar pesto. To my surprise, it still turned out a very decent pesto base for the lasagna.

Recipe accuracy:
As always, the step by step recipe was easy to follow. I made two batches that yielded in total about 2 cups / 500 ml of pesto.

Verdict: 9/10; Will definitely be made again, in both versions!