A memorable vegetarian lunch event at RIJKS* (and also the last time eating out in quite a while, I am afraid…)

As a final event for the Dutch “Week without Meat”, RIJKS Restaurant* organized a unique collaboration with chef Manoella Buffara from Restaurante Manu in Curitiba, Brazil. She would be creating a joint 6-course vegetarian menu together with executive-chef Joris Bijdendijk and his team on March 14 and 15.

We have been to various memorable collaboration events of RIJKS (1,2,3). Still, due to some ho-hum and repetitive offerings from a vegetarian perspective, we had decided to sit a couple out. Therefore, the outlook of an entirely meatless menu was the reason enough to book a table immediately after this event was announced in early February.

About the restaurants
Manoella Buffara started her Restaurante Manu in 2011 after stints at Noma in Copenhagen and Alinea in Chicago. She has always been actively involved in and outside her restaurant to create sustainability awareness, also with her local suppliers. Buffara has been and still is running a host of social projects (like urban beehives, city farms from communities can feed themselves, and leading campaigns for litter, water, and waste reduction) as well. Restaurant Manu won the One-To-Watch award of the Latin America’s 50 Best Restaurants in 2018 and currently resides at #42 in that list.

In 2016 RIJKS Restaurant was awarded its first Michelin star, two years after its opening. Since 2019 it has a 17/20 rating from Gault Millau and is included in the 50 Best Discovery, a new ranking for Bars and Restaurants by The Worlds 50 Best Restaurants organization (which for Amsterdam also includes 212*, and Spectrum**)

About the menu
The fixed menu at the RIJKSxManu event consisted of six snacks and six courses, three by each chef, with RIJKS also providing the pre-dessert and friandises served with our tea (€4,25). The menu was €110 per person, and the dedicated wine pairing was €54 (€30 for my halfsies). Individual wine pairings were available per glass at €10.

In view of the Coronavirus outbreak, the measures at the time included that gatherings of up to 100 persons would still be allowed, thus not affecting this event, and that persons with signs of potential infections should commit to 14 days self-isolation. I understood from the staff that some tables had been canceled because of it, even on the day itself. Still, we could not have anticipated that it would be our last restaurant lunch in the foreseeable future. The Dutch government announced a lockdown for (among others) restaurants and bars just 1 hour after we returned home from this fantastic lunch. With the curfew starting at 6 pm that day, the evening shift of the RIJKSxManu event must have been canceled as well, so we feel extra lucky to have been able to attend and get some exquisite food and wines.

Note: RIJKS will be closed until (at least) April 6, but is offering 3-course menus for €32,50 in Amsterdam via Uber Eats and Deliveroo. I love the creativity in these challenging times, and based on what I saw on Instagram, it looks damn good too!

About the Experience
One of the best things about these collaborations is that you get to experience a completely different cooking styles and cuisines. The Brazilian cuisine was a bit of a blind spot for us, so we were ready to expect the unexpected!

The dishes ranged from exciting plays of familiar dishes to (clashes of) huge flavors. From RIJKS, the snacks bee pollen on the charred corn, the red cabbage gazpacho were great examples of the first section. Their bold flavors were to be found in the Ramsons foam topping for the Gnocchi and Morels as well as the very bitter lettuce that transformed an otherwise (seemingly) straightforward salad into something remarkable.

We loved the delicate (and sometimes not so subtle) play with flavors by Manoella Buffara. It started with the cocoa nibs on the first cassava and tomato snack. At first, they seemed just to have a textural function, but the subtle complimentary cocoa flavor slowly came through at the end, giving the dish a surprising aftertaste. Similarly, the delicious bean soup was at first an exciting interplay with the banana, but the slow-release complex heat from peppers transformed the subsequent spoonfuls. The Endive, Fennel, and Citrus dish certainly brought your taste buds on high alert, but the most memorable course of the day was Manu’s dessert: ‘Seaweed, Mushroom, and Dill’. The description already raised our eyebrows when we first glanced at the menu, but it worked incredibly well together. Within each bite, the seaweed, dill, and candied nuts and grains alternatively came through as most prominent flavor, all while being mellowed down a bit by the milk ice cream, which had a dusting of truffle powder. Well complemented by the not so sweet and raisiny Chenin Blanc pairing. Excellent stuff!

The only dish that we didn’t care too much for was the first one; the cold celeriac and nori with the (hazelnut) miso broth. It was nice, but a bit too one-dimensional. The ingenious pairing with the Dutch white wine made from the Solaris grape, made the dish come alive a bit, bringing a much needed sweet element. All wine pairings were well chosen, many organic or natural wines, and often made with rather unconventional grapes, like the Solaris above, as well as Païs, Ugni blanc, and Rolle. I am not a huge fan of sour beers, so besides a couple of small sips of the gueuse to try the pairing with the salad (which did work very well by the way), I left it at that. The previous times that we went, service at RIJKS had always been friendly, but very erratic. Although there still is some room for improvement on details (serving chipped bowls and plates, clearing the cutlery with yet one course to go), it was a considerable improvement.

The visuals
After a crispy shisho leaf tempura as amuse, we started with our 2 sets of snacks, which accompanied with a glass of Grande Reserve Champagne by Dehours & Fils (€15). The delightful bread with popcorn butter was served throughout lunch.

First up was the set of 3 snacks by RIJKS: 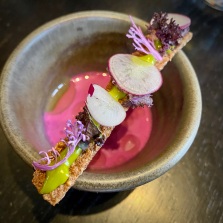 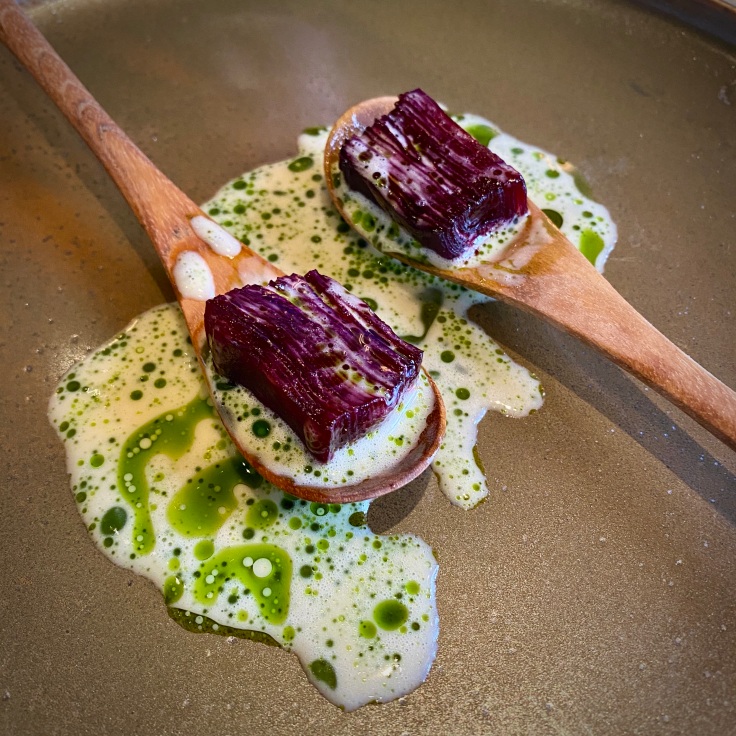 Then came the snack creations by Manu (clockwise): 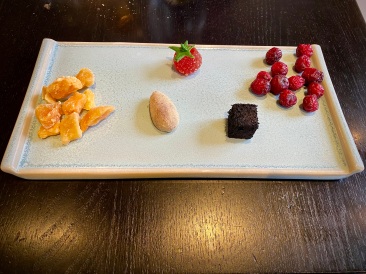 Friandises RIJKS: Pumpkin | Fennel | Celeriac | Tomato | Cepes
In view of hazelnuts used in one of them and potential residue in the wooden box, I got everything served on a plate and had Cranberries instead of the Celeriac.