Another delightful lunch at Restaurant 212*.

Just over a year since my last visit and in the meantime being awarded their (deserved) first Michelin Star, a business lunch brought me back to Restaurant 212 headed by chefs Richard van Oostenbrugge and Thomas Groot.

Our 6-course lunch needed 3 choices from our side. For the main dish, it was either pigeon or wagyu beef (the latter at a logical surcharge), and we all had pigeon. Some of us had opted for a selection from their ever-impressive cheese board. No wine pairing was selected, but we had 2 great white and red wines guiding us through the lunch. The white one was a 2016 Pouilly-Fuissé Le Moulin by Jean Manciat from Burgundy’s southernmost region Mâconnais. The Italian red was a 2013 Vino Nobile di Montepulciano Riserva by Fattoria del Cerro (Tuscany) served with the pigeon and cheese course.

Come dessert, it was good to see that their signature Apple dessert (already back in their Bord’eau days) was back on their menu, so I choose that one while the rest enjoyed their Champagne rhubarb with rosemary, topped with a ball of nitro-frozen – yet soft-centered – goat yogurt. My dessert wine was a 2016 Auslese Johanneshof by Reinisch. This wine from late-picked Rotgipfler grapes – which are quite rare as they only grow in Austria’s Thermenregion – was surprisingly light (only 7.5% ABV) yet very fresh and not overly sweet. The other dessert wine was from Austria too: a noble sweet, berry forward, 2016 Zweigelt Beerenauslese by Weinlaub Alois Kracher.

Once again, the dishes were stellar, innovative, and beautifully plated, and the service was pleasantly informal yet knowledgeable (and patient as we left around the time that they had their staff dinner…).

After starting with a delicious “shot” of seaweed and ginger-infused broth, prepared tableside in a set-up that you would sooner find in a chemistry lab than in a kitchen, on came the amuses: 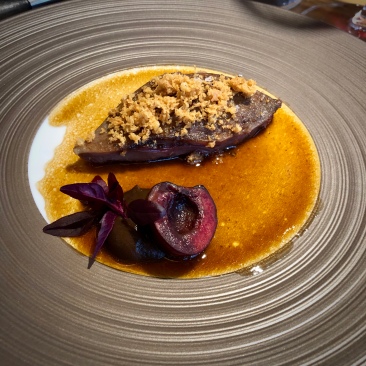 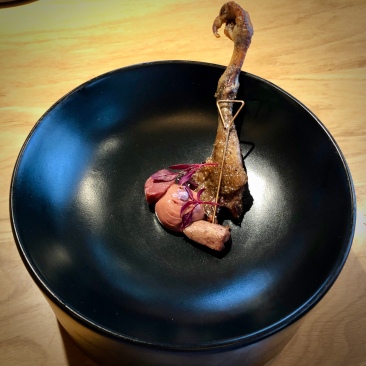 The ancient Greeks and Romans used garum, a fermented and salted sauce/paste made from fish guts, as one of their strongest condiments. It was produced similar to the soy and fish sauces in Southeast Asian cooking, and therefore garum has a big hit of umami flavors. I had a mackerel-based garum paste before at Stockholm’s Gastrologik**, and can confirm that a little goes a long, long way! 212 skillfully shows that you can also use pigeons for garum and used it in modesty as the sauce did not overpower the dish at all.