This a recipe from the Will It Waffle blog that was published on Serious Eats.

Years ago I found an award-winning Swedish food blog about cooking with a coffee machine and cats (not combined though). Not that I actually wanted to try it, but amusing nonetheless (and it now has an English version too). However, when first looking at the Will it Waffle blog, I wanted to give it a try.

What worked and what didn’t:
It sure gives interesting new textures to familiar food. So far I successfully revitalized leftover pizza slices, created mac ‘n cheese waffles and chorizo/pizza shortcrust waffles and of course these churros waffles.

Churros are deep-fried, sugar-coated sticks of dough made from what essentially is a choux pastry, the same stuff that is used to make the French pastry classics like éclairs and profiteroles. This type of pastry consists of melted butter, water, flour, eggs, sugar, and salt. That pastry is spiced up with some cinnamon, waffled, buttered and served with cinnamon sugar and hot chocolate sauce. You can make the one from the recipe, but you can also heat some pre-made chocolate sauce and add a pinch of cinnamon to it.

You need to put in some elbow grease bringing the choux pastry together – especially as you need to double the quantities as the kids like it so much – but trust me: it’s well worth it. Also, note that the pastry will only come together at the last moment, so don’t despair when incorporating the eggs. Their warning not to add too much pastry in the waffle maker is spot on as it expands a lot. They advise a ¼ cup per waffle; I used an ice cream scoop to measure instead. 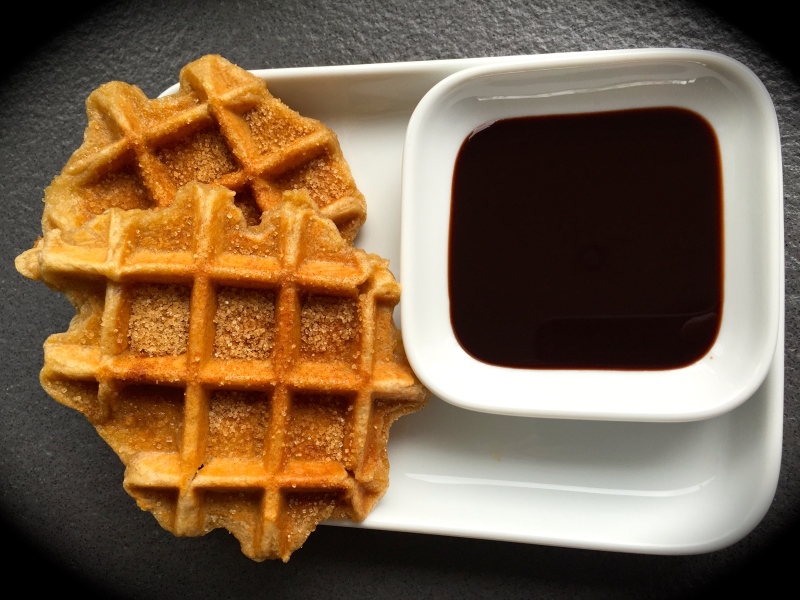 Although not as crispy as deep-fried churros, these waffles have a very satisfying texture too and are a lot less fatty. I would not go as far to claim that they’re healthy, but hey… eating these once in a while can’t hurt, right?

Recipe accuracy:
The recipe is accurate and one portion of pastry yields about 8 waffles, so serves 4 (at most…)