For the cookout’s main course for the kids and the vegetarian option, we wanted to do a simple pasta dish.

One made from scratch, but only needed a few minutes to prepare and serve as – from experience – we always tend to get in a time squeeze come main courses. This recipe is from Daniel Gritzer over at Seriouseats.com. I wasn’t able to take a picture before it was devoured, so I had to revert to the original photograph from the recipe made by Vicky Wasik.

What worked and what didn’t:
It was a weird experience to make a pancake-like batter without any milk and eggs and use water instead. I didn’t have a cast iron skillet at the time, so I used a special pancake pan from Tefal. As the pan was not yet hot enough when I started, it could not cope with this type of batter, so the first one was a bit dodgy. Afterward, it went really well, and the batter yielded about 10 pasta pancakes. Take your time to get them brown properly; undercooked ones are not very nice. After cooling and them individually (instead of stacked), I used a pizza cutter to create small slices.

For the pesto, we used Serious Eats’ already tried-and-tested recipe and Koen provided the necessary elbow grease grinding everything in the pestle and mortar 💪🏻. As expected, the pesto tasted great. 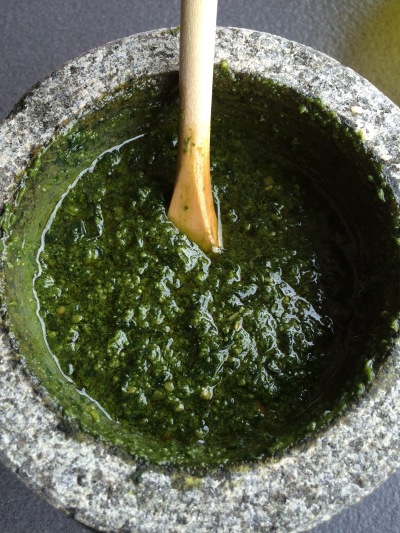 Indeed it only took about a minute to reheat, drain and combine with the pesto and serve the pasta with a sprinkling of parmesan cheese. And in a blink of an eye, it was devoured; I couldn’t even try them myself or even take a picture. It went down without any complaints and coming from 8-10-year-olds, I think that it a pretty good sign… They also liked the “Parmesan and Pesto Pancake Pasta Pizza Pieces” tongue twister. 🙌

Recipe accuracy:
The recipe is accurate, but from a portion perspective, it’s not enough for 4 adults, or perhaps only as a starter. We used about slightly more than half of the pesto in order not to overwhelm the pasta.

Suggested tweaks:
I followed the recipe and added the water to the dry ingredients…. and had to strain it through a sieve to get the lumps out before aerating the batter. In the restaurants that I worked for, we slowly added the dry to the wet ingredients with a sieve while whisking continuously to avoid lumpy batters. I tend to think this method works better, especially if there are significant amounts of liquid to incorporate.

Verdict: 8/10; (Apparently) nice and less messy than making other types of fresh pasta. Also, a good one to get the kids involved in the kitchen. Will be made again.