Some more adventurous fillings for a quesadilla!

The Mexican cuisine is one of our favorites ever since we got to sample the real stuff when we visited Yucatan back in 2002. We never really liked hard taco shells but have made loads of burritos and enchiladas with wheat and corn tortillas. The kids always favored quesadillas, likely because it was the only kid-proof option on the menu of the Mexican restaurants over here (and usually with pineapple chunks 😅).

Nowadays, quesadillas from whole grain tortillas are almost always go-to preparation. We make them with the regular taco or burrito fillings, so without the hassle with folding or long oven times. Depending on our appetites, we eat 3 to 4 quesadillas in total, which we’ll share. However, if we want to eat something else than the kids, I will just make two versions. By the time the kids start to devour theirs, ours will already be in the pan!

Our basic version is dead simple. Spread two tablespoons of salsa on one large tortilla, bung on shredded cheese, your preferred filling, and finish off with more shredded cheese (about 100g/3oz each of veggies, protein, and cheese in total) and top with another tortilla. Fry the quesadilla in a preheated large pan with a little bit of butter for about 3 to 4 minutes on each side, using a large spatula to turn it over. Golden brown and crunchy on the outside with a piping hot, melty cheese filling. Amazing stuff!

Feeling more adventurous or can’t be bothered with a Mexican version? Use a tomato sauce and your favorite toppings to create a pizza-style quesadilla. Fancy a ham and cheese toastie substitute? Just go for it. Use salami instead, and you got yourself a panini quesadilla. Go French Melt-style with heaps of onions, gently caramelized with thyme and garlic, topped with Gruyère… 🤤

The ideas for these two alternative quesadilla fillings came from recipes from the March 2020 edition of BBC Good Food Magazine. We chose to try the Creamy Garlic Chicken Quesadilla and the Leek, Bacon & Mustard Quesadilla.

The first is a filling with roast chicken and a mixture of watercress, chives, lemon zest, and garlic cream cheese and a 50/50 mix of mature cheddar and mozzarella, which works so well from a flavor and gooeyness perspective.

The second is a filling with braised leek combined with wholegrain mustard, parsley, and the same cheese mix. As it would be the vegetarian option of the night, we did forego the bacon. Similarly, you can also up the quantity veg and leave out the chicken in the first one.

The flavor of both quesadillas was terrific. The freshness of the watercress and lemon easily cuts through the richness of the cheeses. Even the kids liked both of them, which I hadn’t expected for the leek and mustard one, but it’s a flavor combination that just works tremendously well.

Both original recipes are for one quesadilla, each intended to serve two. It would be two very hungry persons considering the quantity of the prepared fillings. I followed the 50/50 cheese mix, but I doubled the amounts to be able to make two quesadillas of each comfortably. To taste I ended up at three times the wholegrain mustard in the leek filling.

Here are the recipes of the quesadillas I prepared (also a slightly different methodology compared to those from BBC GoodFood Magazine). 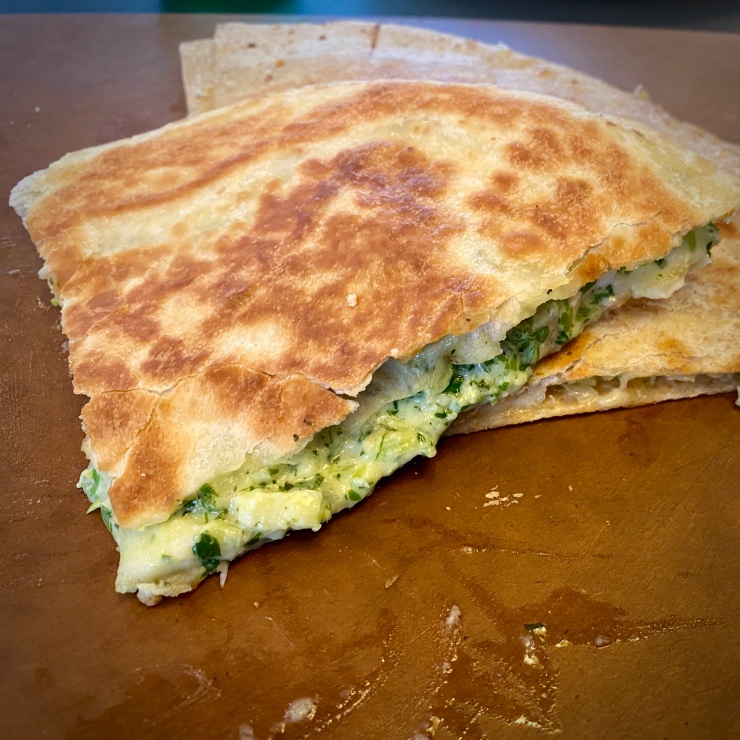