Around the World – Morocco – Chickpea Tajine with Couscous

I found some fabulous M’Hamsa Couscous (hand-rolled and sun-dried for a toasted flavor) and tomato passata from Les Moulins Majoub. Time to get my tajine out and make a stunning veg-packed dish!<< REW
In 2002 we booked a last-minute holiday with friends to Agadir, Morocco. As proper tourists, we spent our first day at the beach. Vast underestimation of the power of the sun so much closer to the equator + refreshing sea breeze + selective application of sunscreen = burnt to a crisp. I actually had a white handprint on my back were there actually had been some sunscreen… In short, we had to recover for a couple of days, so we spent our days poolside, in the shade, playing mah-jongg and cards.

We stayed in an aparthotel, so either need to self-cater or venture out wandering through in the city and grab a bite in one of the many bakeries or restaurants. Besides loads of fish coming straight from the harbor we had our first experiences with tajines: stews that cooked in namesake earthenware pots with dome-shaped lids packed with spices, fresh herbs, veg and usually a sweet and savory combination by the addition of (dried) fruit.

We soon agreed that the prospect of having to spend another week and a half at the hotel pool – or worse, at the beach – was not very appealing. Therefore, we decided to grab a bus and head off north and travel up the Atlantic coast to Essaouira and then inland to Marrakesh. There, still recovering from the Mother Of All Food Poisonings – likely caught at one of the restaurants on the famous Jemaa el-Fnaa square – we decided to book a multi-day tour to visit the spectacular Moroccan inland. Hooray for loperamide!

Via the desolate views from the tops of the High-Atlas mountains, the lush strip of green in the Dadès Valley, the 300m / 900ft sheer walls of the Todra Gorge, the Kasbah of Aït Benhaddou, we spent a night at Erg Chebbi, one of Morocco’s two Saharan ergs – vast seas of dunes formed by wind-blown sand. 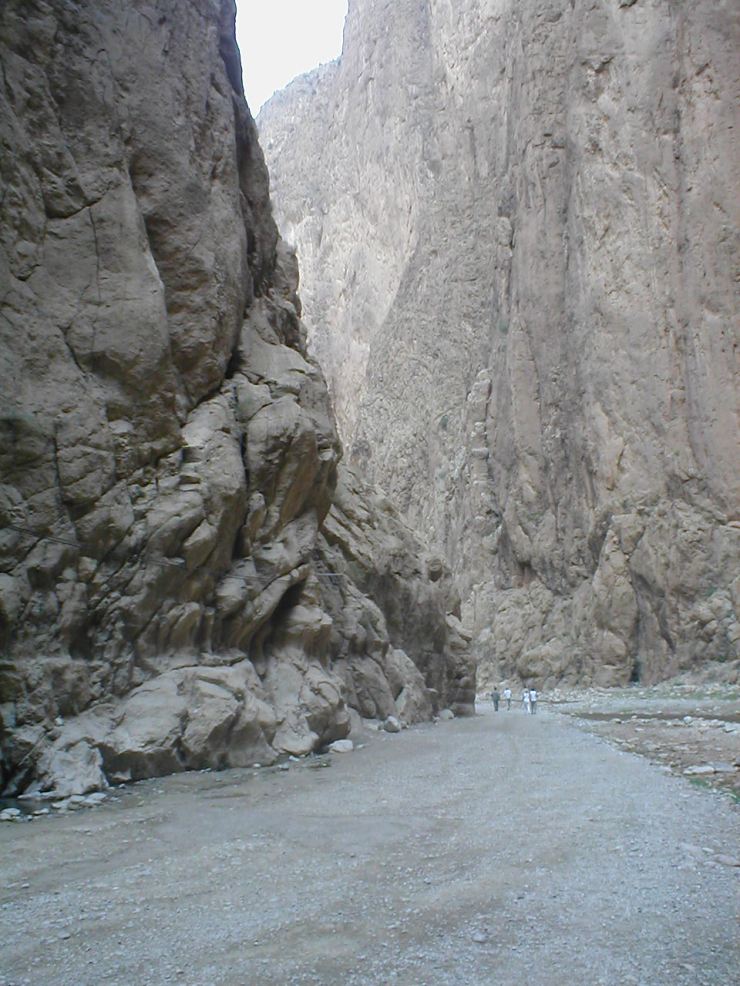 Perhaps it was the intensity of the last part of the trip – the blistering heat from desert, the breathtaking scenery, the somewhat uncomfortable camel ride at dusk, the thousands and thousands of stars, the immense Bedouin tent – or just that I finally was getting better, but the tajine we had there was really astonishing. On the way back to and in Agadir, we had quite a few tajines, but none of them came close.

I am still not sure what caused my food poisoning, but that last thing I ate before all hell broke loose was a b’stilla pie. This a pie which combines sweet and salty flavors; a combination of crisp layers of phyllo type of dough, savory meat – usually pigeon or chicken – slow-cooked in broth and spices and shredded, and a crunchy layer of toasted and ground almonds, cinnamon, and sugar. When I returned home, it took me at least 5 years to mentally grow over the food poisoning and be able to appreciate the Moroccan cuisine again. For some stupid reason, this commonly used combination of flavors tripped some circuits in my brain for many years, and it was able to make me feel physically sick again.

Luckily I grew over it… This recipe is based on Jane Hornby’s Slow cooker chickpea tagine over at BBC Good Food. Using my tajine, I needed to adapt it as I really wanted to first sauté some of the vegetables instead of merely stewing them. Below is my version.

What worked and what didn’t:
This was a fabulous and rounded tajine; a spiced tomato sauce, a slight kick from the harissa, balanced by the sweet touch from the apricots and honey and the freshness of a dollop of yogurt. Yum!

To my surprise, the couscous turned out a bit too wet. It wasn’t as fluffy as I thought it would be even though I followed the instructions and ratio of liquid to couscous. It still tasted terrific though, and I recommend (at least for the adults) to stir a teaspoon of harissa through the couscous; it is a fantastic combination.

Recipe accuracy:
The recipe was easy to follow and serves 6-8 persons (instead of 4).

Suggested tweaks:
Adding some more spices is possible, just use 1½ to 2 times the mix from the recipe. For a carnivorous option, you can add some merguez sausages to the tajine about 30 minutes before the end the cooking time (to prevent overcooking)