We kicked off 2016 with having a go at some Asian inspired dishes based on some bookmarked recipes and spices that we had in the pantry.

First off, we made an Udon noodle soup with pakchoi, edamame and chili omelet (we found it in the Allerhande magazine; the link is in Dutch) together with Korean Gogi Wanja Jorim meatballs in a soy glaze (based on Euroma’s Meatballs & Co spice mixes)

Secondly, I had a go at a Korean-style beef stir fry, which was based on the Simple Korean Beef recipe by Rachel Schultz. 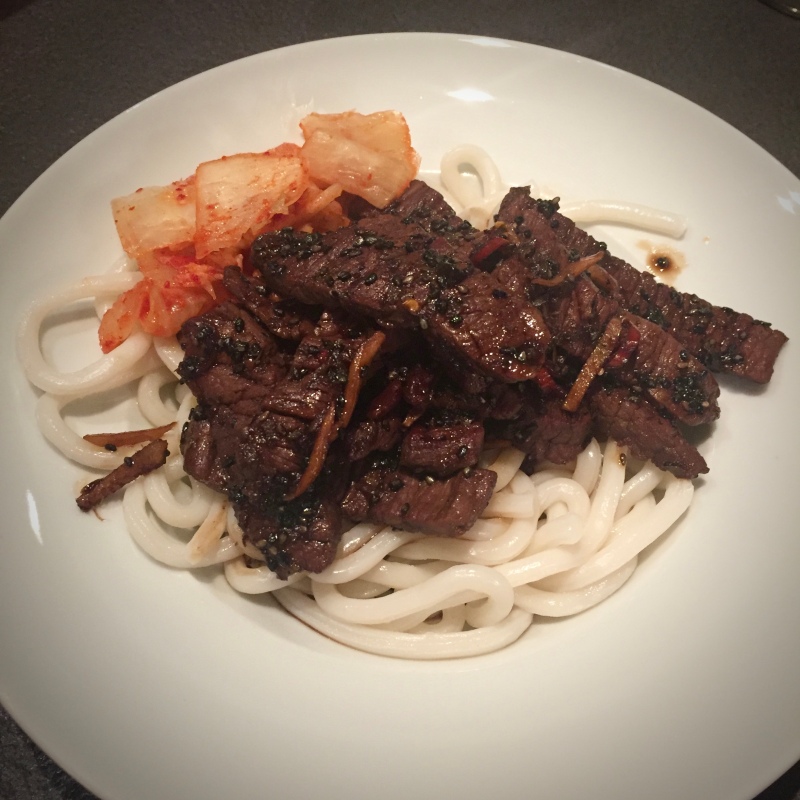 What worked and what didn’t:
What is the single most crucial part of a bowl of noodle soup? The broth, of course! Therefore, this recipe was a bit of a let down; although the other ingredients worked well together, the stock was fragrant, but unfortunately devoid of flavor. It just seemed water with a slight hint of garlic, lemongrass, and Chinese 5 spices; even the sesame oil and soy sauce were nowhere to be found. We got the recipe in the Allerhande magazine itself, and when I saw the recipe online, its reader rating turned out a meager 2 out of 5….  As the rest of the ingredients were very nice on their own, we tried to boost the broth the next day with a spoonful of Doenjang paste (the Korean cousin of Japanese miso) and slivers of fresh ginger. It was a lot better, but still not great.

On the Gogi Wanja Jorim: no endorsements here, but I quite like the spice and sauce mixes of the Meatballs & Co line. Mainly because the spice mixes themselves are quite boldly flavored but do not have any salt in them. That comes in a separate sachet, so you can dose it yourself (I rarely use more than a third of it). I oven baked the meatballs at 175℃ / 350℉ for about 15 minutes before draining the excess fat and adding the soy glaze just to combine and heat through. The succulent meatballs are spicy, and the sauce is less so but does pack quite some heat. A very nice combination!

My beef stir fry, in the end, ended up only loosely based on the original recipe. I had to go with steaks because I used all the beef mince in the Gogi Wanja Jorim and added fresh chilis and ginger in the sesame oil and soy sauce-based stir fry sauce to give it some more punch and also served it with some udon noodles instead of rice. I will definitely try it again in the original version as the stir fry sauce did not have the chance to thicken and caramelize when frying the strips of beef before the latter are overcooked. That being said, together with the kimchi, this was a delicious dish that you can make in just 15 minutes.

Recipe accuracy:
The recipe for the noodle soup was intended for 2, but we ended up with 4 full ramen bowls… The other recipes are accurate.