Portland was the last real leg of our road trip, staying there for 3 whole days.

A pleasant surprise when we checked into Hotel Modera (515 SW Clay Street) was that we also had a small minibar credit: time for some local refreshments after the long drive from Bend to Portland. 😎

At around 6pm, we started our first exploration of the city with a scenic stroll to the Japanese restaurant where we wanted to have dinner. A couple of blocks down from the hotel lies Keller Fountain Park. The beautiful Ira Keller Fountain is designed in the early 70s by Angela Danadjieva, and the cascades from the Columbia River have been the main inspiration. With the size of an entire block, this park is an oasis of tranquility between the busy downtown roads on either side. 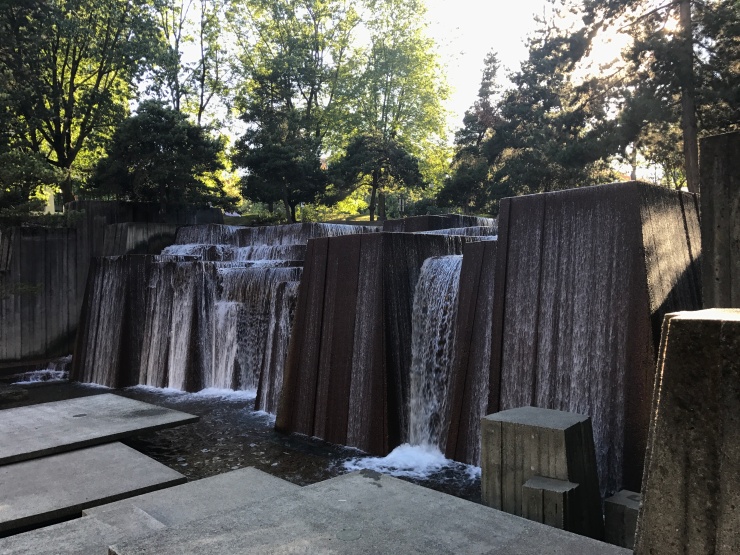 Next up was a walk along the Waterfront, which actually encompasses two adjoining parks: Mills End Park and Tom McCall Waterfront Park. 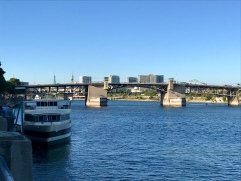 As you may have guessed, one of the many nicknames of Portland is… Bridgetown, due to the twelve bridges that span the Willamette River. However, the official one is the City of Roses. 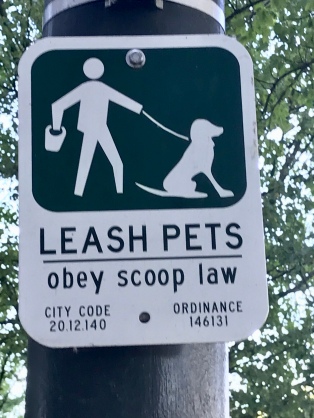 One Scoop or Two?? 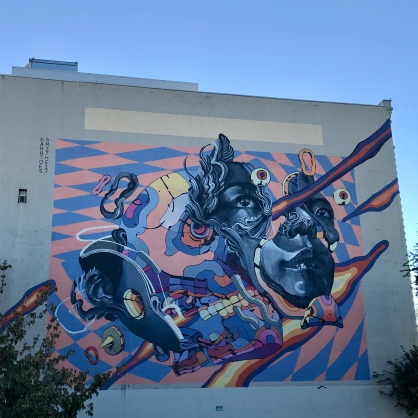 There is a lot to see in Portland if you are into street art. The one that was least PC was the well-hidden piece on 4th Avenue rooftop that seems an awful lot like a cartoon-style weenie flipping the bird… I only saw it in the background of my camera finder when the kids posed for the Chinatown gateway.

A more subtle one was the bearded man gargoyle on the building of the downtown outlet of Voodoo Doughnut (22 SW 3rd Avenue) that had been adorned with wiggly eyes.

Voodoo Doughnut
Speaking of which, Voodoo Doughnut really is an institution of Portland with 2 outlets that are open 24/7. Be prepared to stand in line, have cash available, and make an instant pick of their fantastic assortment of 60+ yeast and cake donuts, fritters, crullers and more. No wonder the kids had already picked them as their only “must-do” for our entire stay in Portland… 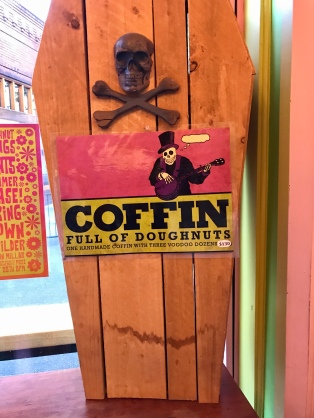 Their selection was as follows: (clockwise) The Miami Vice Berry (limited return of their Raised Yeast doughnut with bubble gum flavoured frosting and berry sprinkles), Grape Ape (Raised yeast doughnut with vanilla frosting, grape dust, and lavender sprinkles) and The Homer (Raised ring dipped in strawberry-flavored icing and a smattering of round sprinkles).

In order not to spoil their appetite for dinner, I said the kids could have one as “dessert” back at the hotel. They had no problem whatsoever to carry their little treasures the entire night in the pink box (“good things come in pink boxes…”).

Yama Sushi & Sake Bar
We walked to Yama Sushi & Sake Bar (926 NW 10th Ave) for an authentic Japanese food experience. We did have to wait 30 minutes for a table (during which some others cast pretty envious looks at the Voodoo Doughnut box 😃) but were rewarded with a view on how the impeccably dressed cooks were expertly preparing all the sushi by hand. We also could see their imposing collection of sake that was adorning the various walls of the restaurant. 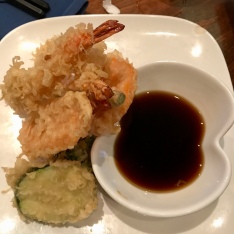 Due to the 3 mile walk and wait for the table, Chantal had become quite thirsty and ordered a large Asahi beer. It was indeed enormous: the equivalent of 2 regular cans of beer! I opted for the sake flight of Junmai quality, the purest rice wine without added distilled alcohol, which obviously paired very nicely with the sushi. Like regular wine, the flight showcased the amazing array of flavor profiles that sake can have. 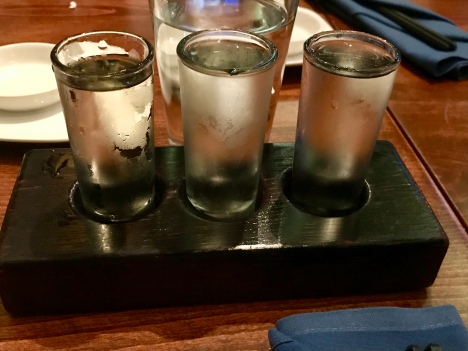 As our main dishes, we have a slew of Sake (Wild Salmon) nigiri, a Seared Wagyu nigiri, Garlic Albacore Tataki as well as a Crunchy Spice Tuna Roll and Maguro (Ahi Tuna) sashimi.

After an excellent dinner – obviously without dessert – and a short Uber ride to the hotel, the kids couldn’t wait to dig in. It must be said, from the small nibbles we were allowed, the donuts were delicious (but preferably to be eaten on the same day) and very, very sweet. You almost can feel the sugar eating away at the enamel of your teeth…😁